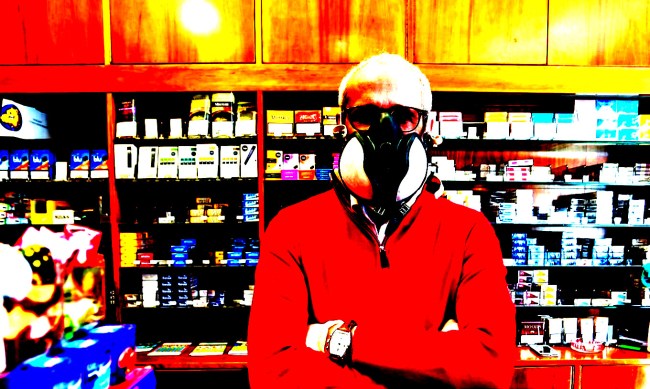 Social distancing. Learn it, know It, live It. If you absolutely have to go out (going to the beach does NOT count), then the Centers for Disease Control and Prevention (CDC) strongly recommends staying at least six feet away from other people regardless of your age or how you are feeling. (I practiced this way before the big health scare.)

Unfortunately, many people out there are still not heeding the CDC’s advice and maintaining a safe distance from others.

As a result, some people have decided to take things into their own hands and force the people they come in contact with into practicing social distancing.

For example, this man who was spotted in in Rome, Italy wearing a giant cardboard donut around his waist that literally will not allow any people to get near him.

When asked by the person filming him what the giant cardboard donut is for, the man turns and simply replies that its, as you’d expect, it is to prevent people from getting too close to him.

The man also appears to be utlitizing one of those grabber things to avoid actually having to touch anything at the market as well.

Unfortunately, as awesome as this man’s design is, unless he disinfects it before entering his home or vehicle, it won’t help much, according to buzzkill scientists ands reported by Medical Xpress, which say that if an infected person comes into contact with his giant cardboard donut it can become contaminated and stay that way for as long as two to three days.

Of course, he isn’t the first man to come up with this ingenious idea for keeping people away from him.