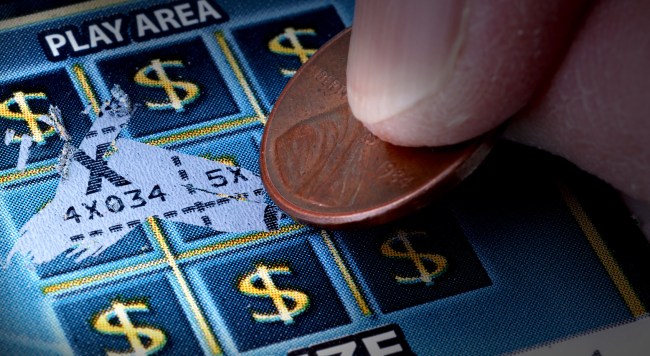 Do you want to know why, despite astronomical odds against ever winning the top prizes, people continue to shell out tens of billions of dollars each year on lottery tickets and scratch-offs?

There’s no rhyme or reason to it, so why not us? We ask.

I mean, if a guy can buy two identical lottery tickets, win and split $3.8 million, with himself, why not indeed?

Case in point, recently a man in Florida (of course this happened in Florida), 38-year-old James Kinder of Jacksonville, won the $1 million top prize playing The Fastest Road To $1,000,000 Scratch-Off game.

Nothing out of the ordinary there. Until you find out that he forgot he had purchased the ticket from a Circle K and it sat on his fireplace for weeks before he was cleaning one day and realized he hadn’t scratched it off yet.

“I came across the un-scratched ticket while cleaning the house; when I scratched it, I realized it was actually a $1 million winner!” Kinder told the Florida Lottery. “I wish I would have found it sooner!”

Kinder chose to accept his winnings in the form of a one-time, lump sum payment of $790,000.

In semi-related news, and one that fits much more in line with the experience most of us have had playing the lottery, a recent Pick 3 drawing in the South Carolina Education Lottery was won by 10,310 different people.

Because when the numbers were drawn they came out 9-9-9.

Each winner will receive either $250 or $500 depending on how much they paid for their tickets.