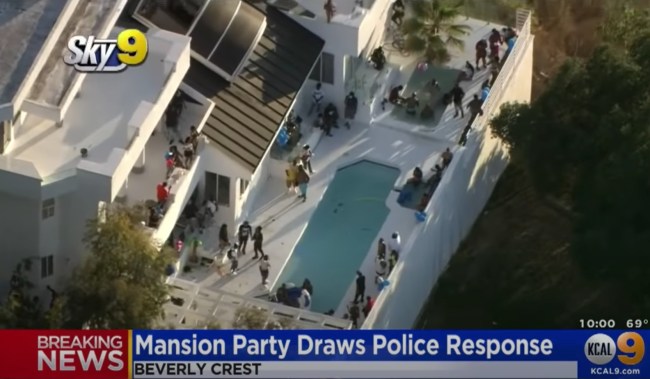 I feel like the term ‘house party’ is more relative than ever these days, in terms of how many people constitute an actual party. What you might consider a proper House Party in 2020 is probably completely different than what your neighbor thinks. For instance, I get stressed out by the thought of being in a house for an extended period of time with more than two or three other people from outside of my household whereas my next-door neighbors threw a graduation party last weekend and had what looked like 50 people in an out of the house all day (in Florida).

Out in LA, we’ve seen all sorts of footage of influencer parties on Instagram and there are rumors of COVID being spread far and wide from these parties. I fully expect Taylor Lorenz to break that story open any day. Now, there’s this footage of a massive Mulholland Drive mansion party with ‘about 200 guests’ where three of those guests were reportedly shot.

Local news KTLA initially reported the LAPD showed up to investigate ‘illegal parking issues’ and ensure there wasn’t any problems with traffic but it’s said they declined to ‘enforce health orders prohibiting parties’ which seems a bit troubling given that there’s a raging health crisis in Los Angeles where the coronavirus has hit harder than most places. The clips of the party is a sobering reminder that some people really DGAF about their health or the health of anyone in their lives.

LAPD is investigating a house party on Mulholland Drive in Beverly Crest pic.twitter.com/wixnARovcW

Earlier in the evening, a DJ could be seen playing as people danced and swam — apparently without masks or much social distancing pic.twitter.com/0rwVXTRv46

After hours of partying, gunfire reportedly erupted just before 1 am and at least three people were shot. All of this after the LAPD reportedly declined to enforce the ban on house parties. CBS Local Los Angeles reports:

“At least three people were critically wounded after shots were fired at a large party at a mansion in the upscale hillside neighborhood of Beverly Crest in the early morning hours Tuesday.
The shooting occurred at 12:47 a.m. at a home in the 13200 block of West Mulholland Drive. In a video posted by one partygoer to Instagram, about 20 gunshots could be heard. There appeared to be two rounds of gunfire. Following the second, there was chaos as people tried to run to safety.
All three were rushed to local hospitals, where two were in critical condition and a third was in grave condition, the Los Angeles Fire Department reports. A man in his 30s and a woman in her 40s were among the victims.
A fourth person suffered a non-firearm-related injury while fleeing.
The circumstances that lead up to the shooting were not confirmed. It’s unclear if any suspects had been identified or arrested.” (via CBS Local)

A person by the name of Kennie D. Leggett identified himself to CBSLA as head of security for the party and told the news outlet the soiree was being held to celebrate someone being drafted into the NFL but declined to name the player. It shouldn’t be all that hard to figure out who it is as people in attendance will certainly be talking about this on social media in the coming days.

His explanation for why they chose to throw this massive party during a deadly pandemic has me more confused than ever: “We have money,” Leggett said. “We are people. This COVID, I mean, is just pushing us out everywhere, and we have nothing, so the only thing we do have is Airbnbs to rent swimming pools for our kids, to do big things and things of that nature.”

Uh, bro, we all have money and we all want to ‘do big things’ but a lot of us recognize that the spread of this virus means people continue to needlessly and tragically die. Maybe it’s because I lost my mother back in January but my sense of mortality has never been more heightened and throwing a house party and/or attending one just seems like one of the most selfish acts a person can do right now.

Large gatherings are currently prohibited by law in Los Angeles County and this mansion is a short term rental. The company that manages the property found out and immediately advised the renters to vacate as they were in violation of the rental agreement. The article on CBSLA says the police couldn’t actually enter the house to break up the party without a warrant which makes ZERO SENSE to me given how policed would break up any and every party I went to in college and never once did they have to produce a warrant but that was in Florida and this is Los Angeles so I’ll assume it’s a difference in state/county laws.

You can visit the CBSLA website to read more about this party. I think we all wish a speedy recovery to the victims who were needlessly shot at a party that should’ve never happened in the first place.