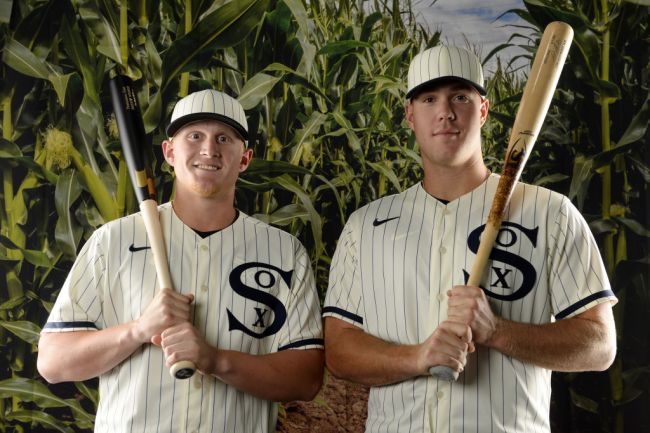 After a one-year pandemic delay, on August 12th we’re finally getting the MLB’s long-awaited Field of Dreams game.

It features the Yankees and the White Sox wearing sick throwback-ish alternate uniforms, tickets that cost way too much, and will probably be cool for a few innings and then just fine the rest of the game. But, it does make for a good excuse to talk about something under-discussed regarding the 1989 classic baseball film Field of Dreams. There’s not much more you can say about the film, but somehow the discourse around the film has missed ironing out a troublesome wrinkle.

Yes, Costner, James Earl Jones, Liotta, and everyone else in the cast put on a masterclass performance. Yes, both the screenplay and score are excellent. And yes, it’s a beautiful masterpiece that blends sport, fantasy, and raw emotion to make you want to cry & hug your dad but also head the ballfield at the same time. It’s a film with few flaws.

But folks, let’s talk about Mark.

Mark, if you remember, is played by Timothy Busfield (a baseball movie great in his own right, shouts to Lou Collins in Little Big League).

Mark drives a sick Jeep Wrangler. Mark has a pretty nice beard. Mark has a job that’s weighty enough to involve partners & buying banknotes, which in the late-80’s was a flex. But, for some reason, Mark is the only villain for a majority of Field of Dreams and frankly, I’m not on board with that.

The film paints Mark and his partners (which we’ve already identified as being an indicator of a sick gig, maybe he’s in real estate or finance or whatever, but he’s just killing it down there in Iowa) as the big bad crew who wants to make Ray & Annie sell the farm with the magical baseball field. Every time you see Mark pop up in the movie it’s because he’s sped that Jeep over to Ray’s farm to let him know that the bank is comin’ for that ass.

Mark in "Field of Dreams" pic.twitter.com/AOL1WuWQLA

For his final act in the film, Mark doesn’t just threaten to take the damn farm away and send Shoeless Joe back to the cornfields of hell, he drops his niece and causes her to start choking on a hot dog. The toughest look of tough looks. There’s redemption at the end; he suddenly realizes that there is an actual ghost team and hops on team “we’re not selling this farm” but only after spending a solid 1.5 hours as the film’s only foil aside from father/son issues.

However, I’m here to say let’s hold up a goddamn minute, because I’m tired of this Mark slander. It’s time to put on Mark’s business jeans and grab our Jeep Wrangler keys and look at things from his perspective.

Imagine you hear that your ex-hippie Cal-Berkley grad of a brother-in-law starts plowing his corn to build a baseball field. I’m no farmer, but that shit sounds like a real bad idea.

You, being a businessman of sound mind cruise over in your Jeep and ask “Hey Ray, the fuck are you doing my guy? You guys weren’t exactly killing it slinging corn and now you’ve just blown through your savings to build a ballpark? I like Cracker Jacks too but what’s the plan here?” and Ray hits you with “Idk man just gonna see what happens.”

Any sane guy would scratch their head.

Time passes, and because you’re a big wig in your job you find out the bank is coming down hard on your sister and her weird husband. You wrangle your partners together and say “Hey guys, let’s scoop this note on the farm, but do me a favor, we’re not gonna foreclose on ‘em. Yeah my BIL is strange but looking out for my sister here, gonna offer them a nest egg.” You’ve got some kindness in that heart of yours, lookin’ out for your sis to make sure she’s not out on the streets, because you’re Mark and you’re a good dude.

But guess what? Ole Ray isn’t selling, and what’s worse, he’s making you seem like you’re the crazy one for not being able to see Shoeless Joe Jackson and the rest of the 1919 White Sox. You’re flabbergasted; you feel like Mugatu taking crazy pills. There’s not a soul on that baseball field and you start to wonder if Ray has been microdosing your sister and neice with LSD or something. Also, who’s the random James Earl Jones-looking motherf*cker they’re trying to pass off as Terrance Mann?

You know what happens next. Mark loses his sh*t, because everyone’s gone crazy. He grabs Karin, Karin falls, Ghost Moonlight Graham saves her, and suddenly Mark’s been brought on team ghost. Naturally, he tells Ray “Wow man, turns out these ghosts are real, wow. You’re right, we’re not selling this farm. You can see where I was coming from though, as it’s commonly accepted that ghosts aren’t real and I thought all that acid you and my sister dropped during your time at Berkley was really coming back to haunt you. Anyways I’ll let my partners know we’ve got a goldmine here. Glad we’re all back on the
same page.”

Mark’s a good dude who got a real bad edit.

Kyle Bandujo is a writer and the host of the Big Screen Sports podcast. You can catch his episode on Field of Dreams here.