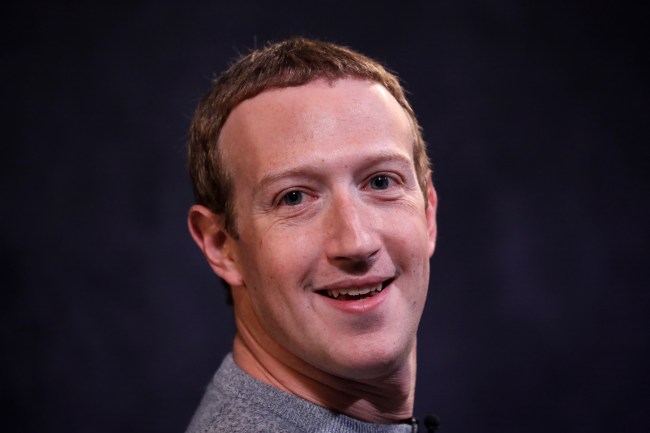 In 2016, it was reported that Facebook spent $5 million annually to ensure its founder and CEO stay protected via bodyguards, private-jet travel and maintenance of alarms, cameras and other equipment at his homes.

The investment to keep Zuck safe from outside elements extends far beyond human threats, and into the center of the solar system.

The 36-year-old did his best human impression by engaging in water sports in Hawaii, complete with an electric surfboard and a five-gallon vat of Banana Boat sunscreen caked on his face because apparently heat and UV rays can be damaging to the mechanical parts within Zuckerberg’s robo-head.

Mark Zuckerberg surfboards in Hawaii with way too much sunscreen https://t.co/TYcdDmBbZG pic.twitter.com/INyGVPvNY6

(I also learned today that Zuckerberg has a caboose big enough to house the Winklevoss twins.)

If this picture seems obscure to you, consider that it features the same guy who allegedly made a Facebook employee blow-dry his armpits before meetings.

Luckily for Zucc, the internet gave him a free pass and the surf photo will likely never be seen again.

NAHT. He is getting more heat online than his sunscreen can handle.

No one has ever seen Mark Zuckerberg and the ghost from Spirited Away in the same room, just saying pic.twitter.com/RZ54gjcHJz

talk to sunscreen mark zuckerberg for the best side quest in the game pic.twitter.com/0JlbkKwsUw

Are we sure Mark Zuckerberg isn't just shedding 🦎 it is summer time 🤔🤔??? pic.twitter.com/wfrrRsBQMS

People are focusing too much on Zuckerberg's sunscreen and not enough on the fact that he's wearing a fucking hoodie to surf. 🤡😂

Mark Zuckerberg with too much sunscreen on looks like he's wearing one of those shitty Michael Myers masks you find at Party City pic.twitter.com/7E2DbdUtv6

What’s more frightening: Mark Zuckerberg with an unbelievable amount of sunscreen on or the fact he has the dumper of a fashion nova model? pic.twitter.com/eL9M9p2VGR

“Wear a mask when you go outside”

google photos of mark zuckerberg over the years and you can see the human leave his body year by year pic.twitter.com/qXbQG15RNa

Why is it that Mark Zuckerberg is incapable of doing anything without looking like a replicant? pic.twitter.com/aWWlI1Rx1S

I knew Mark Zuckerberg loved data. I just didn’t know he loved Data this much. pic.twitter.com/MkOsQm3dE8

Poor Mark. All he ever wanted was to create a platform to creep on his female classmates.