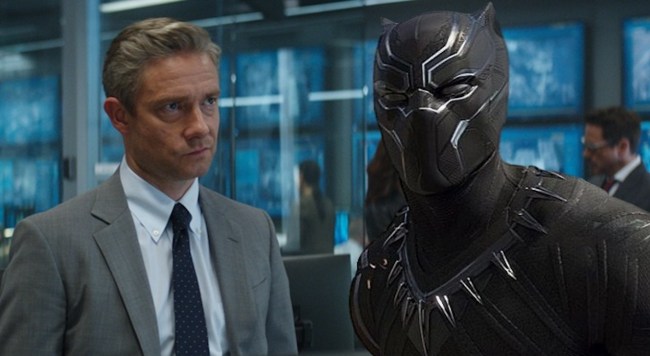 Of all the movies that Marvel Studios has ever made, Black Panther: Wakanda Forever may be the most delicate proposition as it inherently must reckon with the loss of Chadwick Boseman, the late actor who played the titular hero in the MCU prior to his death.

After passing away in August 2020 after a battle with colon cancer, the Academy Award-nominated actor left a massive hole in both the Marvel Cinematic Universe and Hollywood at large, as the late, great 43-year-old brought iconic characters such as Jackie Robinson, James Brown, Thurgood Marshall, and T’Challa to life on the big screen.

Despite the loss of Boseman, Marvel Studios decided to move forward with a sequel to Black Panther anyway, thus creating the monumental task of making a film worthy of Boseman’s memory and legacy.

And while director Ryan Coogler and the team at Marvel should ultimately be trusted to accomplish such a feat, Martin Freeman, who stars in the film and the MCU as CIA agent Everett Ross, admitted that making the film without Boseman was “odd” and “strange”:

“It was strange, that side of it. On the one hand, you’re making the film that you’re there to make, and there are scores and scores of people on set, joined in this endeavor to make the film. But there’s also no question that, at the heart of it, there’s quite a gap now, and you felt it.”

“With full respect to Ryan Coogler and everybody else, who’s sweating and bleeding to get this thing done properly, it was fun… But it was odd. Of course, it was odd with Chadwick not being there,” he continued. “There’s no way around that. I think everyone would find it pretty strange and sad, but at the same time, life things don’t just end. It’s not like, ‘Well, that’s that’s happened, so we just all have to go off and never do it again.’” [via Collider]

In addition to the above cast list, there have also been rumors that Narcos: Mexico actor Tenoch Huerta will be appearing in the film as Namor, who is essentially Marvel’s version of Aquaman.

RELATED: Chadwick Boseman’s Brother Reveals What The Late Actor Would Want The Future Of The Black Panther Character To Be