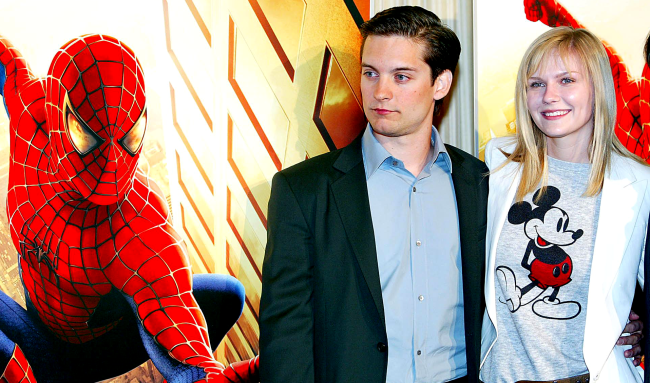 Almost two decades ago there was no Marvel Cinematic Universe. Hard to believe, but it’s true. Way back in the year 2004, we were still four years away from Marvel Studios taking their first into the MCU with Iron Man.

Things were a lot more scattered back then when it came to Marvel superheroes. Spider-Man and Ghost Rider were with Sony, Daredevil, the X-Men and Fantastic Four were with 20th Century Fox, Lionsgate had The Punisher, and New Line Cinema had Blade. Oh yeah, Howard the Duck was a Universal Pictures property.

That didn’t mean that Marvel didn’t try to create some sort of synergy for their characters’ films.

In a tweet on Monday, Twitterer @AjepArts unearthed some photos of Marvel’s planned movie slate back in 2004 and it includes movies from all the studios involved.

HOLY SHIT! In my journeys, I discovered MARVELs film slate in 2004… pic.twitter.com/Zh6OvyRY3C

Down the road, without specific release dates, were movies for Silver Surfer (2007), Nick Fury (never made), Captain America (2011), Deathlok (never made) and few more that are hidden by Spider-Man in the photo.

Other films that Marvel had planned to make back then included movies for Iron Fist, Black Widow (2021), Power Pack, Mort the Dead Teenager and Longshot.

Thor was originally supposed to be featured in a TV series, not a movie, co-created by Marvel and Artisan Entertainment. Artisan also had a deal with Marvel to make movies or TV shows for Captain America, Black Panther (starring Wesley Snipes, who was already playing Blade), Deadpool, Morbius, and Antman.

It was also reported to be “the most expansive deal Marvel has made.”

“Marvel cannot make this kind of deal with somebody else,” said Amir Malin, co-chief exec officer of Artisan. “It’s the most comprehensive deal I’ve worked on at Artisan, there’s a complete franchise universe here.”

But he wasn’t wrong. There definitely was a complete franchise universe there.

Fans had some pretty great reactions to the unearthing of Marvel’s planned movie slate in 2004.

What’s so cool to me is them advertising ALL Marvel films together despite different studios. Imagine if Marvel had that energy still..😔

There was a deathlok movie planned?!

I refuse to believe anyone ever expected Man-Thing to sell

Man, I miss the 00s. pic.twitter.com/x4WwIwKmKJ

Supermovies: This Is What The Next Few Years Of Your Life Looks Like [Infographic] http://t.co/3WXxNflmvI pic.twitter.com/YcYUKKagqn