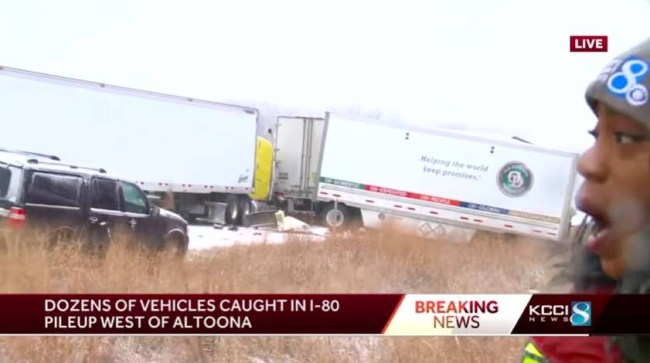 It happens every year. The snow starts to fall, people forget how to drive in it, and a massive multi-car pileup happens on an interstate somewhere in America. It’s like a rite of passage or something to signify that winter is officially upon us.

This year that honor goes to the drivers of Interstate 80 in Iowa.

A quick-moving snowstorm created treacherous driving conditions near the Des Moines, Iowa, area on Monday morning, which led to many accidents across the region, including a multi-vehicle pileup of roughly 50 cars with at least one person severely injured, officials report.

Local news station KCCI reported that the crash occurred Monday around 11 a.m. on westbound I-80 near Altoona, Iowa (a suburb of Des Moines).

“Weren’t going that fast, but when you hit the brakes, you totally slid on the ice,” said Kristi Meyer.

“It is a shock to the system,” said Iowa State Police Sgt. Alex Dinkla.

No sh*t, Sarge. The video is harrowing.

Dinkla said at least one person was seriously injured in the pileup, but thankfully there were no fatalities reported.

He also added that when it snows and you’re driving the best thing to do is REDUCE YOUR SPEED. (All caps emphasis mine.)

Here’s another look because… damn.