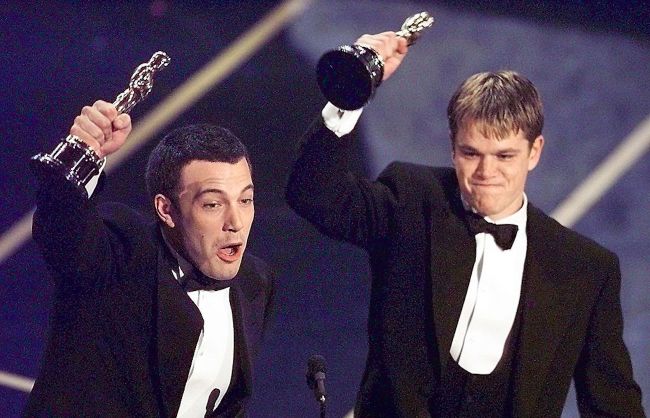 Not to brag — actually, specifically to brag, as it was one of the biggest moments of my career — but I actually interviewed the one and only Matt Damon last week, with the interview going live this morning.  Do us all a favor — you, me, Matt — and give that a read/listen.

While I spoke to the 50-year-old Academy Award winner about his latest film Stillwater, that’s not all that Damon has due out this year, as he’s also set to star in the sword-and-sandals epic The Last Duel from iconic Alien, Blade Runner, and Gladiator director Ridley Scott. To make that film even more highly-anticipated, Damon will be starring alongside his longtime friend Ben Affleck for the first time since 2001’s Jay and Silent Bob Strike Back.

Not only is the famed Boston duo starring in the film, but they’re also credited as screenwriters, which is the title they held when they won the Academy Award for Best Original Screenplay for Good Will Hunting back in the late 90s. Despite the pair’s instantaneous success, their subsequent A-list careers largely got in the way of their screenwriting roots, which is something that Damon said he expects to change in the coming years.

“I think we just found that having made … like, making movies for 30 years, we actually learned something about structure along the way and the process went along a lot faster, ” Damon told ET Online.

“And so I think we’ll write a lot more in the future just because it didn’t turn out to be as time-consuming as we thought. It was actually a lot of fun.”

Damon and Affleck can be seen starring together in The Last Duel, which they also co-wrote with Nicole Holofcener, when the film hits theaters in the United States on Friday, October 15.

RELATED: Internet Reacts To Matt Damon And Ben Affleck’s Absurd Haircuts In Trailer For ‘The Last Duel’, Which They Also Wrote