Maurice Gomez of Los Angeles – IT Worker by Day, Community Hero by Night 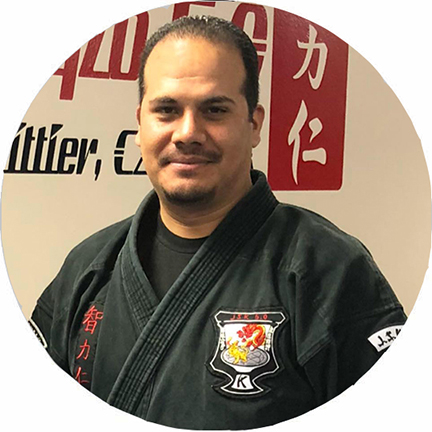 We know 2020 has been – how do you say – kind of a crap year. So while I’m not trying to make it worse from the get-go here, let me lay a data point on you that’s very real and very disturbing: One in four women will experience some type of physical abuse over the course of their lifetime.

Yes. True fact. It sucks. And it’s a figure that has increased by 42 percent since 2016, according to the National Coalition Against Domestic Violence.

But there are people out there – good people – who are trying to change the direction of the trend. One is Maurice Gomez of Los Angeles.

By day, he’s an IT specialist at Confie – one of the largest insurance brokerage holding companies in the U.S. that owns other independent insurance agencies and brokers like Freeway and Bluefire Insurance.

About a decade ago, he settled on focusing on helping address violence towards women. So decided he would leverage some 30 years of ass-kicking martial arts experience to help empower others — especially women — to defend themselves and develop greater self-confidence.

“I have developed a strategy to help people understand predators, determining targets, location, how they establish control and ultimately carry out the assault,” he told me. “I have found most predators follow the same pattern.”

Starting his study of martial arts as a kid and expanding his knowledge over the years, Gomez began working with the Los Angeles Police Department as a trainer, teaching tactical self-defense skills to officers. He left that position in 2016 and switched careers to go to Confie. But all along, he continued to practice and teach self-defense in his free time.

Then in 2010, Gomez pivoted his focus to help empower and support members of his LA community by teaching free classes to area women. His training helps students develop a sense of empowerment, arming them with the confidence needed to protect themselves from a variety of situations, while mitigating the issue before it escalates.

“I have seen how targets of violent abuse are less likely to be chosen by attackers if they show confidence,” said Gomez. “Attackers seek out fear, nervousness and self-doubt to take advantage of, and that’s what we work on in our classes.”

Gomez developed a class designed around the fundamentals of martial arts, but focused on the mental aspect, the most effective defense against potential violence.

His self-defense classes are open to women ages 12 and up, and can exceed groups of 50 individuals.

At times students may be representing multiple generations of women within a single family. Gomez is able to provide these classes without charge – that’s free, people – because he makes a solid enough living in IT at Confie.

But still, Gomez hears it over and over. All of his current students have personal experiences connected to domestic abuse or other acts of violence. Some are survivors, while others are tangentially connected through other family members or friends. His students understand violent acts can do more than just physical damage, causing emotional and mental trauma, part of a larger pattern of dominance and control. Gomez works so that these classes are designed to break these patterns and awaken a new lifestyle for the students.

“Most of them think they can’t fight back, but when I show them how strong they really are, when I really bring out the fight in them and make them realize that yes, they can fight back,” said Gomez. “They realize, no, they don’t have to be the next victim. No, it was never their fault.”

Gomez has taught hundreds, if not thousands, of students the practical uses of martial arts, the appropriate mindset of confidence and self-reliance, and inner strength. And it’s not gone unnoticed – he received an Official Certificate of Recognition by the California State Senate, 32nd District, for the program’s dedication to women’s safety.

“Empowerment is contagious for those who harnessed the courage to deal realistically and safely with some of your worst and most terrifying fears,” he notes. “Empowerment is about giving yourself authority. When people are more confident with personal space, boundaries, and physical skills, they can enhance their relationships more positively and with more fulfilling interaction. You are never alone on your journey towards empowerment”

It’s the stuff made of heroes, and Gomez certainly is one.