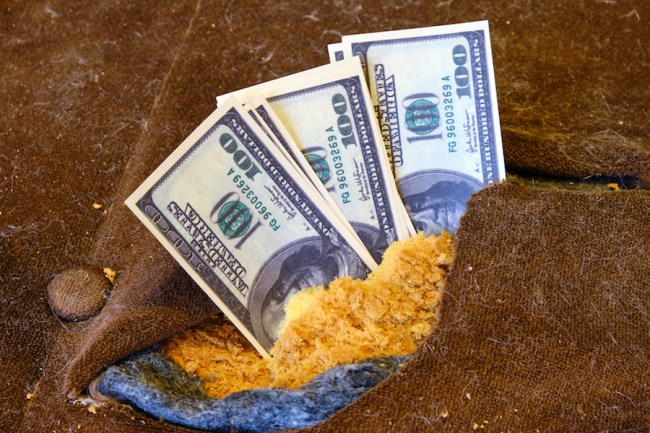 Did you ever go digging into a chair, sofa, or car seat for loose change? You probably considered yourself lucky if you scraped together close to $1.

Customs officers at Miami International Airport went digging into a chair during a routine check and uncovered close to $500K hiding inside.

The chair was part of a large furniture shipment bound for the Dominican Republic.

Since the money was unreported, which is against U.S. currency requirements, the money was seized. Failure to report more than $10,000 worth of cash that is being exported out of the country can result in the money being seized.

On a typical day, the Customs and Border Patrol (CBP) seizes “an average of about $207,000 in unreported or illicit currency along the US borders.”

So, this was a pretty good day. High-fives all around!

“Criminal organizations will attempt to export large sums of cash to launder their ill-gotten gains,” said Robert Del Toro, the CBP’s acting port director. “This is a significant seizure and represents the impact we can make on criminals’ profits and was the direct result of our officers’ vigilance and watchfulness.”

Officials didn’t specify whom the money – and furniture- belonged to or whether criminal charges would be filed probably because they’re working all that stuff out.

So what will happen to the $500K? The cash will likely sit around and possibly become evidence.

What happens to the chair? Someone isn’t getting the new recliner they ordered for the living room.

If you’ve ever wondered what happens to all of the illegal items people try to smuggle inside suitcases, carry-on luggage and stuck up their butts at airports, here’s you’re answer.

From the weird shit people carry in luggage to people fighting in the middle of the boarding process, working in an airport doesn’t seem like very much fun.