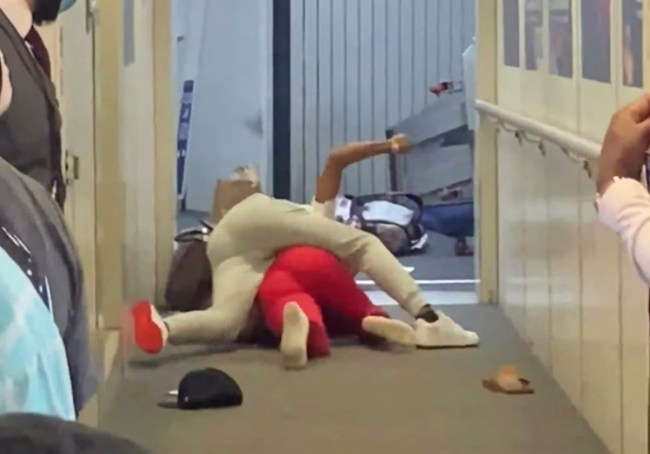 There are hundreds of reasons for a flight to get delayed but the reason is rarely due to women brawling on the bridge to the plane.

This wild fight between two women on the jet bridge to a Delta flight at La Guardia Airport is insane, but possibly not out of the ordinary, as one onlooker exclaims “Come get Aaliyah, she’s fighting.”

The women were boarding a flight to Atlanta when they came to blows – for reasons unknown – in front of other passengers and allegedly some relatives.

As the women wrestle on the ground and swing at each other, another concerned woman walks into the frame and shouts, “Aaliyah! Stop! Stop!” as she moves closer to the brawl.

A man runs into the middle of the fight, trying to break it up.

Destiny Davis, a passenger on the flight who shot the video, posted the clip on Twitter, writing, “flight delayed due to a fight on the gate…great.”

Davis later told a news outlet that “there was little intervention and the police took a while to show up to the gate” and the two women appeared to be either sisters or cousins.

A Delta spokeswoman told The New York Post that the flight to Atlanta “was delayed due to a customer issue” without providing any other details.