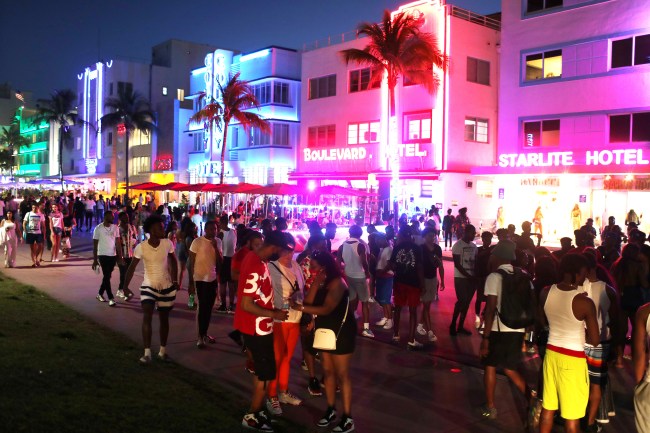 Spring Break is pretty much over at South Beach.

On Saturday, the city of Miami Beach is imposing an 8 pm curfew and will block most people from coming into the beach area after 10 pm due to the large crowds and increased violence from tourists in the past two weeks.

#BREAKING: South Beach will have an 8 PM curfew starting tonight. All restaurants, bars and sidewalk cafes must close.

All three major causeways entering Miami Beach will be closed starting at 9 PM – 5 AM. A dedicated lane will be open for residents, hotel guests and workers. pic.twitter.com/sgmMREFFHl

Due to overwhelming spring break crowds, the city of Miami Beach will impose an 8 p.m. curfew in the South Beach entertainment district and block most eastbound traffic entering the city after 10 p.m., beginning Saturday.

Interim City Manager Raul Aguila, who will authorize the emergency measures, told the Miami Herald that he recommends keeping them in place through April 12, or the end of spring break. A countywide midnight curfew is already in place due to COVID-19.

“These crowds are in the thousands,” Aguila said. “We’re at capacity.”

The measures, which will be announced at a 4 p.m. press conference Saturday, follow weeks of confrontations between police and large crowds, fights, and occasional bouts of violence, including a deadly shooting. Mayor Dan Gelber and public health officials have also warned about the risks of spreading COVID-19 among the throngs of visitors crowding the city.

Before the city’s latest ordinance, iconic South Beach nightclub The Clevelander had announced they were shutting down due to the unruly crowds.

NEW: The Clevelander on #OceanDrive will close temporarily over concerns for the safety of employees during a difficult spring break period. pic.twitter.com/x9zNjoIQ7o

One local South Beach restaurant claims they lost an exorbitant amount of money in back-to-back nights after patrons left without paying when fights broke out in the middle of dinner service.

over $20k lost after huge fight broke
out and everyone left without paying pic.twitter.com/r4VkCRcxnE

Huge fight broke out again last night
at the same restaurant we previously
posted at Social 1024 on OCEAN DR pic.twitter.com/cBPJ0GtbHg

Here’s how packed South Beach was on Friday night.

Current situation on Ocean Drive, where there appears to be thousands of people crammed between 7th and 8th Streets. @wsvn #7News pic.twitter.com/iWaepxpsBa

The current emergency measures in Miami Beach will last at least 72 hours until city commissioners decide to extend the order or cancel it when they meet in a few days.