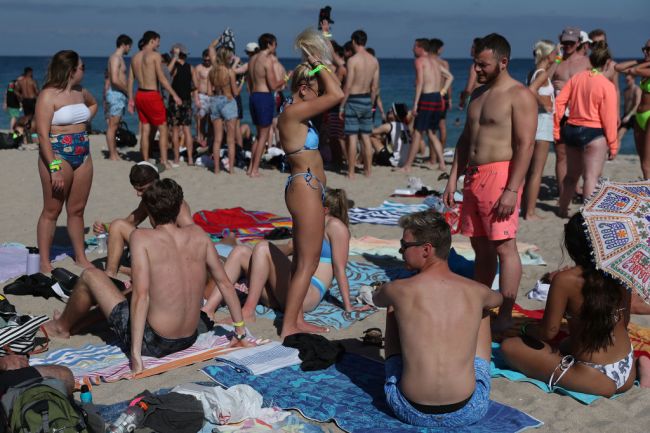 Spring break opened with a bang in Miami, where there were approximately 150 people arrested this weekend.

The weekend kicked off with two police officers being injured on Friday night. The Miami Beach Police Department released a press release saying that two officers were injured and taken to the hospital. The police said partiers on Ocean Drive became “aggressive, unruly” and they fired crowd control munitions, including pepper spray at the spring breakers. The pepper balls caused mass chaos as the panicked crowd scattered.

James Harrison from Brooklyn was reportedly arrested on charges of battery on a police officer, resisting an officer with violence, inciting a riot and disorderly conduct. Harrison shouted obscenities at police officers when they attempted to break up a crowd of over 200 people that were blocking traffic, smoking marijuana, and carrying open containers of alcohol, according to a police report.

Video shows the 19-year-old Harrison being body-slammed by a police officer. Harrison allegedly pushed one cop to the ground and assaulted another.

Rough Spring Break Friday night on #MiamiBeach. This just happened at 8th & Ocean Dr. It appears to show a bodyslam takedown as police try to control a crowd. Witnesses who sent me this video say cops were forced to deploy pepper spray which caused a stampede. @wsvn #Exclusive pic.twitter.com/s8gS3Silxe

“That presented a very dangerous situation for our officers,” said Ernesto Rodriguez, public information officer for the Miami Beach Police Department. “Our officers had to go into a crowd and attempt to arrest an individual. The crowd ended up turning on those officers.”

Here’s some of what was taken off the streets Friday night by @MiamiBeachPD. pic.twitter.com/bjh7hy6jYa

In a much less violent video, women were seen twerking on cop cars.

“If you are coming here because you think anything goes, you’re going to have a terrible time. We are going to arrest you,” the mayor stated.

Gelber was also concerned about the large spring break crowds spreading COVID-19, “We’ve got a problem with too many people coming here to let loose.”

Miami is under a midnight curfew during the coronavirus pandemic.