He Did It Again, Michael B. Jordan Surprises Fan Who Took Cardboard Cut-Out Of Him To Prom 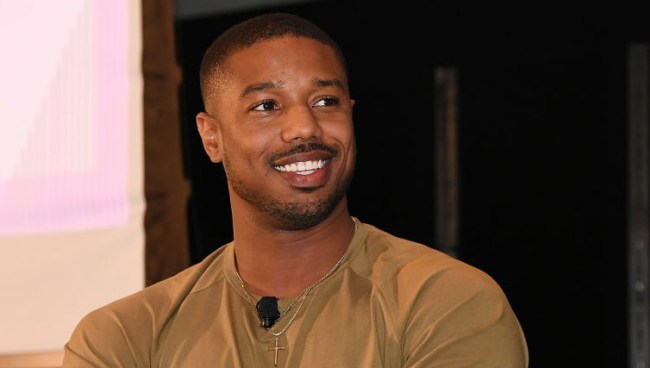 When discussing the coolest, nicest people in Hollywood, the name Michael B. Jordan should be at or very near to the top of that list. Which is kind of funny, in a way, since he loves anime and lives with his parents (though he has an A+ response to anyone who trolls him about it).

That being said, it’s all part of his charm and why the 31-year-old such a popular actor these days.

Mix in things like him sneaking into theaters to watch Black Panther with fans, his funny relationships with his co-stars, and the fact that he is very fan-friendly and it’s no wonder he’s such a favorite.

In fact, Jordan is so fan-friendly that back in May while shooting Creed 2 in Philadelphia, he met up with a Temple student who was brave enough to shoot her shot by sliding into his Instagram DMs.

so I slid in his DM’s, and then this happened ✨ pic.twitter.com/Jfm0Tj4dms

And now, just to prove that was no fluke, Jordan just went and made yet another superfan’s day with a great surprise.

Back in April, high school student Audeva Agyeman didn’t have a date to her prom, so instead, as one would, she took a cardboard cutout of Michael B. Jordan to the dance instead.

“After not being able to get a prom date from procrastinating and waiting til the last minute, i spent 3 hours making my sexy prom date,” she wrote on Twitter.

After not being able to get a prom date from procrastinating and waiting til the last minute, i spent 3 hours making my sexy prom date. I got on @TheShadeRoomm but now i need to MEET my man @michaelb4jordan @TheEllenShow pls help. RT FOR #GetDeetoMBJ pic.twitter.com/9y7Kt4MwsJ

News of her effort soon made its way to The Shade Room, who posted about it on Instagram.

That, in turn, got the attention of Jordan who commented, “😂😂 this is called commitment! 🙌🏾”

Cool, right? Totally made her day. Neat ending to a neat story. But wait…

Fast forward a few months and Agyeman was contacted by someone from Creed 2 asking her to come to the movie set to shoot a superfan video. Awesome! But wait…

Then Jordan himself showed up.

“I had to surprise @de.gye after hearing about her taking me (kinda. Lol) to Prom. She had no idea we would bring her to the set of @creedmovie but you know I had to show her some love since I couldn’t actually be her date❤️🙏🏾 #creed2,” wrote Jordan on Instagram where he posted a video of the meeting.

“Quick S/O to all 5 guys who decided not to go to prom with me, this was so much better.😂YALL I MET MICHAEL B(e my date to senior prom in May) JORDAN!! Best Day Ever 🤧💕 Thank you,” she wrote.