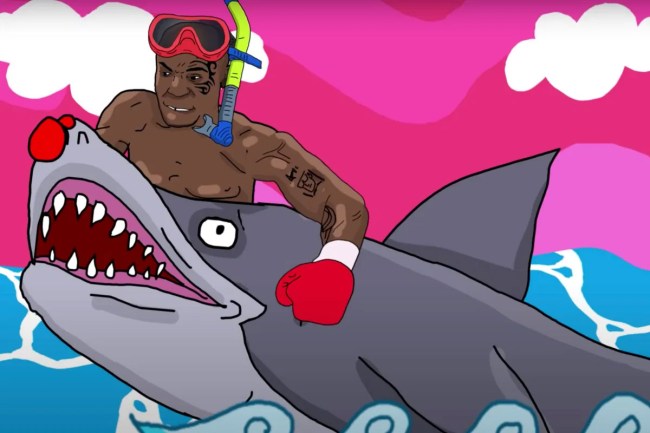 As Mike Tyson is getting prepared for his “exhibition” fight against Roy Jones, Jr. where both fighters have said they’re cool with dying in the ring, he took some time out of his schedule to release a self-titled EDM debut track.

The song by Tiki Lau called “Mike Tyson. Feat. Mike Tyson,” would have been interesting enough, but just to dial the insanity up to 11, they went and created an animated music video which sees the boxing legend punching out a giant shark as well as some kind of sea monster.

Yes, it is arguably the greatest music video ever created.

As you may recall, during Shark Week this year, Iron Mike punched out a real life shark, saying, “I learned from this experience doing Shark Week that whatever intimidates me, I am still able to step up to the challenge of overcoming anything that would prevent me from accomplishing my life’s mission of reaching my highest potential in life and bringing me closer to God.” 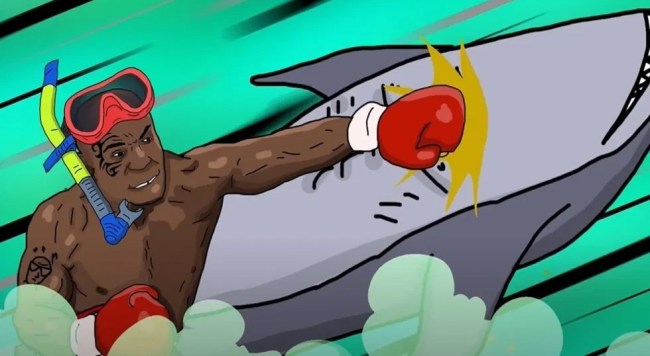 As for how this all came about, Tiki Lau told oneedm.com, “Our multi-platinum Grammy-winning and legendary Tiki Lau team member Damon Elliott was in the studio with Mike Tyson and had him record the vocals then sent them over to us. Damon is like the DJ Khaled of our group. They knew we were ready to deliver, and we did. You can’t help but get super pumped up when listening to this song.”

They added, “In the process of making this song, every day we would wake up and think, “What would Mike Tyson do?” We knew that we needed to make a song that was so dope, Mike Tyson would wanna knock someone out to it. We are humbled to be the ones behind his walkout song for his official comeback fight on November 28th, a part of sports history.”

Oh, you didn’t know this was going to be his walkout song for the Jones fight? Ready to get hype?