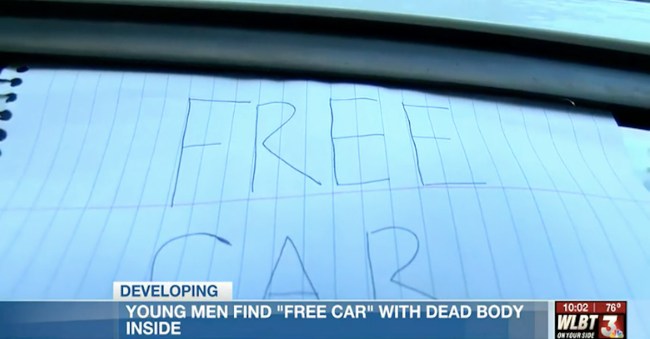 As a general rule of thumb, if there is a car with a “free car” sign on it and the key inside, don’t get in the car. Two Mississippi men recently learned that lesson the hard way.

According to to Copiah County Sherriff Byron Swilley, a body was found inside of a vehicle over the weekend. Swilley said that a man drove the vehicle about 30 miles from Byram to Copiah County before discovering the corpse.

As the story has it, two men found the car in Byram. It was parked on the side of the road with a “free car” sign attached and the key was in the ignition.

For some unknown, not-too-bright reason, they got in the car. Not only did they get in the car, but they drove it to a family member’s home.

Upon arrival, they opened the trunk. In the trunk was the dead body.

County Coroner Ellis Stuart said the body had been in the car for multiple days and was discovered without any clothing. So these two dudes took a car, drove it home, popped the trunk and found a naked dead man. Yikes.

The body has since been identified by local police through tattoos and immediate family, but they have not yet determined where the original crime took place. The two men who drove the car are considered suspects until the investigation is closed, but their story appears to check out.

Per WLBT, the car was first spotted on the side of the road at 9:30 a.m. on Saturday. It sat there all day on Saturday before the two men discovered the abandon vehicle and hopped in at some point later that night.

By Sunday, the car was gone. We now know why—

Two guys saw a free car, thought nothing of it, and drove off. This is your reminder to simply… not do that.