Someone Has Been Streaming ‘Morbius’ On Twitch For Hours On End, Thousands Of People Are Tuning In And The Comment Section Is Truly Unhinged 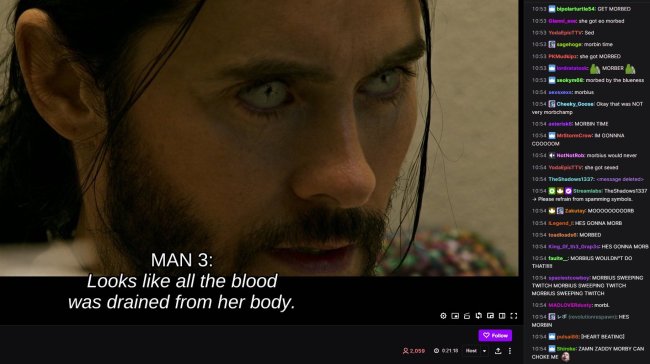 While the Jared Leto-starring Morbius may not have been a critical or commercial success, it was a cultural success in one aspect: it became a meme. And these days, memes are as present in our lives as any other form of art/media, which means you could argue that Morbius has had a bigger cultural imprint than, let’s say, James Gunn’s The Suicide Squad.

Even as someone who half-jokingly hates Jared Leto beyond reasonable measure, even I could next predict the extent to which Morbius would become a meme, as phrases such as “It’s Morbin’ time” and “selling one Morbillion tickets” and “Morbius fever” have now become part of the pop-cultural lexicon.

The memeification of Morbius has only amplified in recent weeks as the film was made available to rent and purchase on digital, leading to likely thousands upon thousands of Morb-curious people to check out the film for the first time.

Take what’s been going on over on Twitch this week, for example, where someone not only streamed the film for more than 12 hours straight — the account was named Morbius247 before it was shut down, which suggests the person behind it was hoping the film would play on an endless loop — but thousands of people tuned in, leading to a truly unhinged, Morb-crazy comment section.

Someone has been streaming the entirety of Morbius on twitch for the past 12 hours and there's currently over 2000 people watching it live. I'm losing my mind pic.twitter.com/u8qcqHMFY9

I don't even care if this is just being done by Sony to promo Morbius at this point, this is one of the most insane twitch streams I've experienced in my entire life pic.twitter.com/7aUYtHUhU7

It just goes to show that in the age of memes and TikTok and Twitch and whatnot, there’s more than one way for a movie to leave a mark.

And since you’re here, may as well toss in some extra Morbius memes for good measure. You know, for ultimate Morbification.

everyone knows about Morbius's signature catch phrase "it's morbin' time" but only true morbheads know about the one he uses when the fight is getting serious: "Alright, no More B.S."

My friend just sent me all of Morbius in a single gif on discord? pic.twitter.com/Pf3YaWgSh7

I wish Morbius came out in the early 2000s so we got a movie tie in game which only vaguely followed the plot of the movie.

It's hilarious to me that Morbius is the movie everyone openly pirates and posts everywhere to the point where there's a twitch channel for 24/7 Morbius viewing pic.twitter.com/VFofOSCwx5

No way the entire morbius movie is this much of a meme that it's literally being streamed 24/7 on twitch 💀 pic.twitter.com/lDrZ7dikzt

RELATED: Marvel Fans Are Dunking On The Ludicrous Post-Credit Scene In ‘Morbius’