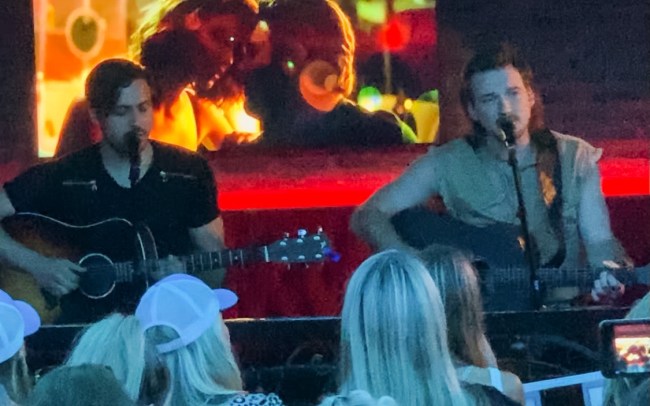 Back in October, rising country star Morgan Wallen and his mullet were cancelled from performing on Saturday Night Live after a video emerged of him partying maskless at the University Of Alabama. The following weekend, he was scheduled to perform on the show at 30 Rock in New York City.

Wallen blew a huge shot to perform on the national stage, with the show’s producers removing him as a musical guest from the bill, citing COVID-19 safety precautions. The 27-year-old country singer was captured being pretty much anything-but socially distant in Tuscaloosa, doing shots and making out with women all over TikTok. And SNL wasn’t going to take a risk on him bringing COVID into their working environment.

The highlight of the SNL epsiode is the sketch with Morgan Wallen and Jason Bateman poking fun of the whole controversy. Nice to see him embrace it with a sense of humor and a little healthy regret.

Wallen enters an Alabama bar, cheersing “to no consequences!” Bateman, dressed as Wallen in the future – neck gaiter and all – shows up to “stop him from partying tonight.”

It’s like a COVID, country-fried version of A Christmas Carol…

Two months ago at The University of Alabama… pic.twitter.com/IVkNMUoLUf

Wallen’s fans who tuned in loved it, of course, while others were pretty ticked off that Saturday Night Live would give a second change to someone after exhibiting some pretty reckless behavior.

There was also a good bit of irony in the whole thing:

Morgan Wallen in a skit w/ Jason Bateman making fun of himself is exactly the content I was hoping for, thank you SNL 👏🏻👏🏻 pic.twitter.com/F3uynXfTw7

SNL should be fucking embarrassed for letting Morgan Wallen back on and not only that, but for making a joke about it

“stay safe from snl” then into a morgan wallen partying sketch

I believe in second chances, but definitely a conflicting message SNL is sending by doing a skit about daughters not going home for Christmas to stop the spread, immediately followed by a skit making light of Morgan Wallen doing the exact opposite.

PETE DAVIDSON & MORGAN WALLEN TOGETHER IS ALL I NEEDED IN LIFE #SNL pic.twitter.com/X52drLA4Un

And others? I get a sense that some people don’t seem to understand how popular Morgan Wallen is, positioned to be one of the biggest new country stars of a generation. If you’ve been… basically anywhere that’s not New York City or California, you probably know that his music is beloved pretty much everywhere right now.

His fans responded to the chirps in a rather dignified way, all things considered.

Morgan Wallen is the Nickelback of country music #SNL

The only time I have watched SNL in the past 5 years was to see Morgan Wallen. Speak for yourself.

I got to hang out with Wallen last year during the CMAs in Nashville, so I get how popular the man is. He straddles the world of Bro county and alt country with some revived freshness. “Whiskey Glasses” is a banger. And his cover of Jason Isabell’s hauntingly beautiful anthem “Cover Me Up” rules.

just thinking about how many non-country music fans on the coasts are getting introduced to Morgan tonight, stoked for him! https://t.co/ialjqhpy5h

Controversy from some blue check marks aside, at the end of the day this is all just showbiz. Maggie gets it right at the true winner, which is ultimately SNL for navigating this thing pretty well. If SNL would have cancelled Wallen all-together to make an example out of him, I’m not sure that would have played to well to the show’s audience in rural America.

Whoever does Morgan Wallen’s crisis control deserves a huge raise this year. #snl

This country is already divided enough, with plenty of finger-pointing at the media.

Meanwhile, Wallen also comes up a bigger winner here. Dude is just going to be loved more by his fans for embracing the whole thing with a sense of humor.