People Shared The Most Insane Rules They’ve Ever Had To Deal With At Work, Any Sound Familiar? 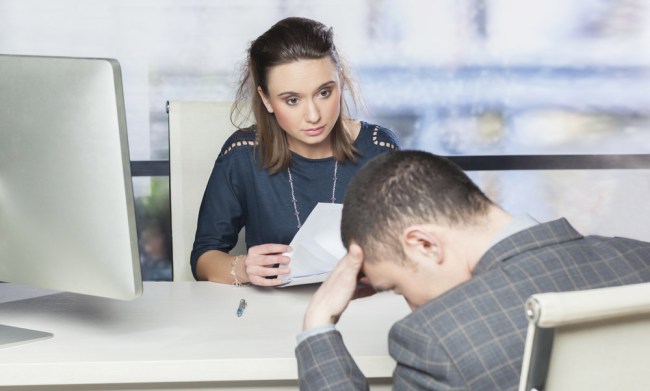 Think you’ve had some bad jobs in your career? Who hasn’t? But at least we didn’t have to deal with any completely ridiculous rules while trying to perform our jobs.

Oh wait, yes we have. I know I certainly have. However, as ridiculous as some of the workplace rules I have dealt with over the years have been, none of them were as insane as these rules that were revealed by some poor souls over at Reddit.

At my old job, HR held a meeting to tell us that there was too much swearing on the sales floor. Someone raised their hand and pointed out that swearing is very common in our industry and that is the way that our customers speak. HR later sent out a memo explaining that swearing should be limited to conversations with clients. It was amazing. ~ redemption_songs

I once needed a pen. Figured this was a reasonable ask. Went to the supply closet on my floor, which was locked. Asked the floor’s admin, she told me to go to the main supply room in the basement. Went to the basement and explained my situation of needing a pen. They told me all requests for supplies must be approved by my department head. Problem is, being new, I’d never met my department head. She also worked in San Francisco (I worked in Milwaukee), so I needed to send an email both introducing myself, and asking her if I had permission to get a pen from the supply closet. ~ NicolasCage4eva

Business casual dress code even when I work at home. (They Skype me to check.) ~ McNuggetsBitch

If you are stuck in traffic on the way to work, you must email the CEO. Phone calls and texts are not permitted, only email. ~ gshell

Old job of mine in a warehouse. Our stations were pretty far apart, so when we’d listen to music we’d all usually have our own stuff playing. Not a problem since you could barely hear the neighbors music. Well, the CEO didn’t like hearing multiple songs when walking through the warehouse. He made a rule that we all either had to listen to the same music, or none at all. ~ Historiun

I used to work at a place in which my boss implemented a no more than 2 glasses a day water policy. What a cunt. I ignored this rule and complained directly to our CEO and the matter ended later that day. What was weird though was the majority of people actually followed the rule and some even shopped me up to HR about ‘breaking the rules’.

I left not long after that because not only was my boss a bellend, but if my colleagues were going to hr over me drinking water, then I obviously couldn’t trust them. ~ X0AN

No scotch tape. On anything. I was a teacher, and the principal wouldn’t allow it in the building, threatening letters in your file for insubordination if she saw it on your desk. Only painter’s tape, which by design, is meant to not stick very well. I hung posters in my room with circles of duct tape on the back side, with strips of painters tape on the front side just for show. Subtle, petty insubordination. ~ johndoenumber2

We got Keurig for our break room. Our boss removed the part of it that you use the k-cups for because it had a needle in it, which is what pierced the k-cup. Her reasoning is that she was afraid someone poke their finger with it. We worked in a blood donation center. We were all phlebotomists. She didn’t see the irony. ~ jenroberts

There was an issue where there was too much ‘socializing’ going on on the factory floor, particularly when people were working while sitting down (false – skewed supervisor perception), so they made everybody stand. When that presented ergonomics problems, they brought in these weird chairs that made you sit at a slant, had no backs, and no wheels, so they wouldn’t cause “distractions.”

No part of it made any sense. ~ Poison-Song

We have a lock on the first aid kits. So if you just need a band aid for a cut, you have to get the key from the Safety guy. Which in turn makes it a ” reportable accident” with mountains of paperwork and investigations. We use an unbelievable amount of duct tape now. ~ staydizzycauseilike

My workplace doesn’t let you use the word “problems”. Instead, we have to say “challenges” if something is wrong. As a problem is a negative word, and challenges promotes the fact that there is room to fix said problem… ~ throwaWaY2113232444

Fireman…our Risk Management department decided long ago that poles were too risky for us. So we use the stairs. We have poles. Anyway, now the newest rule is no free weights….as in NO free weights to work out, stay fit. Go into burning high rise- absolutely, walk around the station carrying 40lb dumbells…too risky. ~ Haligan74

If you are 1 min late it is a tardy. If you take a half day nothing goes on your record. I was told to just take a half day if you are going to be late because they straight up fire you for tardies. Also if you clock out early it is a tardy. If you have to go to the doctor on lunch break and it is going to take and hour and ten min, take the rest of the day off. Weird. ~ Whosyabobby

I’m a teacher, so I have a million stupid rules I have to follow. But the worst one is that my performance evaluation is based on student improvement on the STAR literacy test. I teach wood shop. ~ CoolioDaggett

If we want to take a full 5 day week off we need to use 2 vacation days, 1 personal, and 2 more vacation days. Can never use 3 vacation days straight!?!? ~ icecreampopncereal

Had a workplace time our bathroom breaks and deduct them from our allotted 15 minute breaks or lunch. We had to go see the office manager to get a key to open the restroom. As soon as we left his office he would start a timer… when you got back he would stop the timer and tell you how much time you needed to deduct from your lunch or next break. They watched our breaks like a hawk.

Also, if you made a mistake they would stand over you and time you while you fixed it and deduct that from your lunch or breaks.

You couldn’t bring anything “that smells” for lunch and they had no way of heating anything up.

I worked out my contract and split. ~ jamaidens

Alrighty then. I think that’s enough batshit crazy for today.

Check out the rest of the insane workplace rules over at Reddit.