Mrs. Sri Lanka Injured When Mrs. World Snatches The Crown From Her Head After Winning 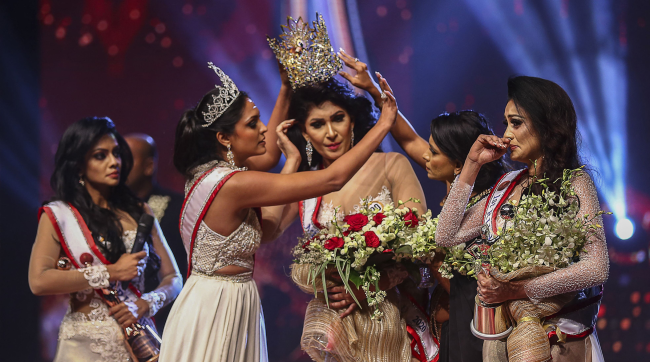 As if the world needed another reason to completely do away with antiquated beauty pageants, a brouhaha occured over the weekend when 2020 Mrs. World Caroline Jurie snatched the crown off the winner of the 2021 Mrs. Sri Lanka pageant, Pushpika De Silva, just moments after it was announced she had won the title.

Jurie, the 2019 winner of the Mrs. Sri Lanka pageant, is seen on video wasting no time after event organizers placed the winners’ sash and crown on De Silva’s head, grabbing the microphone and announcing “there’s a rule that you’ll have to be married, and not divorced. So, I’m taking my first step saying that the crown goes to the first runner-up.”

After forcefully removing the crown, Jurie put the crown on the runner-up’s head, who immediately broke into tears.

For the uninitiated, the Mrs. World pageant has been around since 1984 and the rules state that only women who are “married as of the date of entry” may compete.

After the controversial turn of events, De Silva claimed in a Facebook post that she is, in fact, married and that when Jurie ripped the crown off her head she suffered an injury.

Pushpika De Silva
The winner of Sri Lanka's biggest beauty prize has suffered head injuries after a brawl broke out on stage.#beauty pic.twitter.com/RetXm72yLz

“I say with great responsibility that I am not a divorced woman even at this moment of writing,” wrote De Silva. “If I was a divorced, I would dare them to submit my divorce papers. I haven’t hidden from the world that I’m alone with my child. I also have personal reasons to be that way. But, being separated is one thing. Divorce is something else. I’m still an undivorced woman.”

Mrs. World Inc. organizers issued a press release about the situation which stated, “We are deeply disturbed and sincerely regret the behavior of our current title holder, Mrs. Caroline Jurie, Mrs. World 2020, at the crowning.”

It continues, “Let it be known, Mrs. World Inc. does not sit in moral judgment. If the delegate sent by Mrs. Sri Lanka-World to compete in the international competition is legally married she will be accepted.”

Chandimal Jayasinghe, the national director of Mrs. Sri Lanka World, told the BBC that the crown will be returned to DeSilva.

“We are disappointed,” said Jayasinghe. “It was a disgrace how Caroline Jurie behaved on the stage and the Mrs. World organization has already begun an investigation on the matter.”