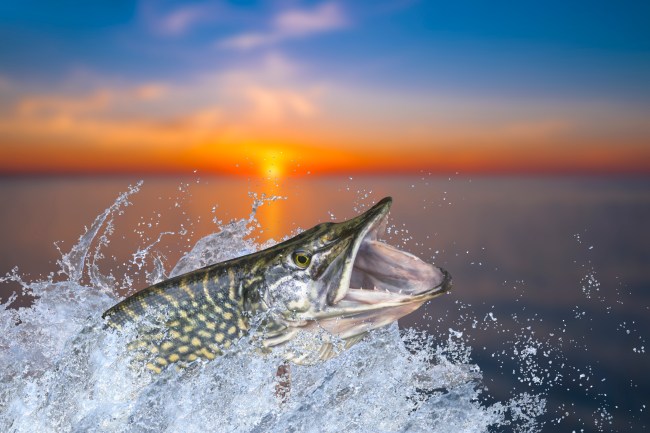 Today we’re not talking about shark encounters on the beaches of Florida or an alligator attack in South Carolina. We’re headed all the way up to the Great White North where a Canadian swimmer was viciously attacked by a fish and the damage was so bad her rescuer said it looked just like an alligator bite.

The fish in question is a Muskellunge aka ‘Muskie’, a freshwater fish related to the Northern Pike with gnarly teeth. They’re usually found in northern states and up in Canada but they are found as far South as Northern Georgia. These fish are ambush predators who ‘swiftly bite their prey and then swallow it head first’ but they’re also known to eat ducks, rats, and other easy meals that might find their way to the lake.

You don’t often hear about these fish attacking people but the damage done isn’t shocking, what is surprising is this fish managed to pull the woman underwater like a damn alligator. CTV News has the report:

“I was just standing in water up to my chest – I knew there were weeds over to the side from me, and then I felt something rub on my left leg,” Kim said, thinking it was a weed or maybe a turtle they had seen earlier.

Kim said she felt a sharp pain in her leg, and when she looked down she saw what looked like an alligator head.

A muskie, more than one metre long, had grabbed hold of her calf.

“Honestly I don’t really remember how it all happened – once it bit me it started flailing me through the water and then took me under,” she said. “I started kicking, and I guess obviously punching it, because I have cuts on my hands, and then it let go and I came back up screaming that I needed help – something had bit me.” (via)

When she was pulled out of the water they threw a towel over her head so she wouldn’t see the damage. The gash was 18-centimeters long and her rescuer said “It looks just like an alligator attack.” There were two nurses at the North Star Village hunting and fishing lodge in Minaki, Ontario where this occurred and they were able to assist the victim until they got her to the hospital. Look at the teeth on this species!

The CTV report says she will now need to undergo a six-week process of plastic surgery to repair her torn calf and the lasting damage isn’t only physical. She told the news “I can’t sleep at night, I have horrible nightmares and I wake up in a sweat and screaming – it was scary.”

As for the local impact on tourism, some are optimistic and some are in disbelief that this happened in the first place.

Todd Longley, a professional angler for City Cats Guiding Service, said muskies have been given the nickname the ‘fish of 10,000 casts’ because they are so difficult to catch. He said for one to attack someone is extremely rare. “It just doesn’t happen – it’s very, very, very rare,” he said.

“If anything it should stimulate the economy – dude, you want to go out and catch one of these big toothy creatures because they are big, they are beautiful, they live a long time, and to catch a 50 plus inch muskie is amazing,” he said. “They should be respected, but at the same time – they shouldn’t be feared. It is just a very, very rare occurrence – that’s it.” (via)

I’ll be honest, as an avid fisherman, I would see this as a sign that there are particularly large muskie in the area and think that’s a good sign to go fishing there. The fact that someone was attacked by a fish wouldn’t deter me from going in the water entirely but I’d also probably be aware of my surroundings because I’m also easily spooked when it comes to stories like this. I remember watching some ancient Bill Cosby movie that my older brother had on TV where a ‘killer rainbow trout’ killed some people in a pool and after digging I found it it’s Leonard Part 6 which has a 2.2 out of 10 rating on IMDB.

The plot is some evil genius is apparently brainwashing small animals into committing murder but as a tiny child all I remember is a rainbow trout swimming into a pool and killing someone and this explains why I was afraid of swimming in the deep end of the pool at night for most of my childhood. Watching this trailer, it’s now hard to comprehend there was a time in life when every single person in America wasn’t aware that Bill Cosby was a complete and total POS.

The movie had a $24 million budget and only earned $4.6 million worldwide. Suffice it to say that this was NOT a great film.

You can see the graphic images of the attack over on the Winnipeg CTV News article. There is a 15-minute interview on YouTube where they break down this ‘fish story’ if you have time to skim through that:

A damn Muskie. Unreal. I’d expect this from a barracuda but not a freshwater fish.