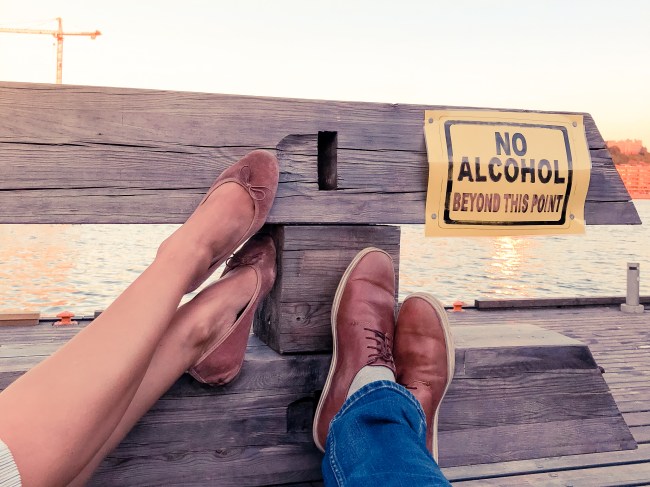 There are many reasons that a man might have to stop drinking. It could be something a judge has decided for him, or maybe a doctor has advised that the old liver might peter out if he doesn’t give it a break. Sobriety could also be something a guy wants to try because he’s sick of being all hungover day in and day out. Whatever the reason might be, putting down the bottle for any amount of time can be a daunting task, to say the least. It’s just that booze is such an integral part of our daily lives. After all, most of us use it to unwind after a long day of work, to socialize with friends, to watch sports, and to get it on with our old ladies. Without it, some, if not all of those things, might become less than enjoyable, and then, dear God almighty, what’s left to live for?

These were some of the thoughts I had last week after making the decision that I wasn’t going to consume alcohol for the next year. That’s right – after more than two decades of being a dedicated boozehound, I was giving the stuff up for twelve months – cold turkey. Gulp! If I’m honest, I’m still unsure how I’m going to survive without losing my damn mind. But I’m proud to report that I did get through the first week mostly unscathed. Mostly.

Some say that’s the hardest. It’s that period of uncertainty where the newly sober attempts to make all sorts of concessions concerning their hell-raising lifestyle and break lifelong habits that have historically led them to the bottom of a 12-pack and a night of drunken indiscretion. Nevertheless, I’ve managed to hold it down without falling off the wagon. I didn’t even scrape my knee trying to get on. How did I do it? Well, it certainly hasn’t been the easiest of challenges. But I’d like to think that the following five tricks helped keep me in check right out of the gate.

Find Something Productive To Do During Key Drinking Hours

Not having a drink is the hardest at the end of the day – when work is finished, the sun is gone and the possibilities are endless. In the past, I would have grabbed a beer or perhaps a vodka cocktail around 5 pm and sucked them down like a thirsty dog until it was time for bed. But that had all changed now. The biggest question was: What in the hell was I supposed to do all night if I wasn’t getting hammered? I mean, how do the sober spend their evenings? I was perplexed and scared. Eventually, I determined that I should probably invest my after-hours into something more productive. For me, that was writing. I earn a living as a contributor to various publications, but I always complain that I don’t have time to finish my novel and other creative endeavors. So, I’m pouring more energy into those projects. But it could be anything – cars, woodworking, surfing. Just find something that you enjoy to fill up those key drinking hours, and make it your new go-to activity after the day is done. Who knows, you might even accomplish something.

Get A New Drink To Replace The Old One

Another maddening aspect of getting sober was overcoming the need to continuously pull beers out of the fridge. It sounds like absolute lunacy to type this, but I felt like an amputee not always having a drink in hand. That was more of a savage reminder that I was now living among the sober than not having a buzz. And I didn’t like it, not one bit. So what I did was simply replace my nightly cocktails with a non-alcoholic beverage. I made sure to have plenty of lime-flavored carbonated water on hand, and I allowed myself to suck as many of those bastards back as I wanted throughout the night. And it worked. Raiding the fridge for a cold beverage whenever I think about booze appears to trick my brain into believing that we’re still living like rockstars.

It might sound a bit cliché to suggest that some good old fashioned exercise can replace drinking, but it can. Before going sober, I was already locked into a daily workout regimen that took a couple of hours to finish. But now that I wasn’t drinking, I found that I was spending more time walking, running, and lifting weights. It made me feel better, both physically and mentally, and more importantly, I wasn’t constantly obsessing over that first drink of the day. Studies have shown that physical activity can play a significant role in helping people avoid the bottle. Plus, booze hinders muscle growth, and it can drastically increase the time needed for recovery. So I figured that putting a little more effort into my workouts would serve to kill two birds with one stone. It would lessen the desire to drink while also giving my body more opportunity to benefit from exercise. I’m eager to see the transformation in the weeks and months to come.

Eat Dinner Earlier In The Evening

Another bad habit I had during my drinking days (um, so long ago) was waiting until right before bed to eat. I’d stumbled into the kitchen all buzzed up and devour anything and everything that could be nuked or heated in the oven in ten minutes or less. But I found that by having dinner earlier – between 5 and 7 o’clock like a normal human being — not only did I care less about getting blasted throughout the evening, but I was also making healthier choices at mealtime. Come to find out, science supports this. Studies have shown that eating high protein food (chicken, fish) and fresh fruits and vegetables can help control alcohol cravings. It has for me, so far. And just think about how much your body will appreciate the added nutrition when recovering from those workouts.

Allow Yourself To Eat All The Snacks

It might not be enough to spend time working on a new project or immersing yourself in workouts to stay sober. After all, there are many times when a man just wants to kick back on the couch and watch some television. Unfortunately, this is when that little voice in your idiot brain starts trying to convince you that it’s time to drink a beer or two. After a week, I still find that this happens to me. Sometimes it feels like no matter how much energy I put into other activities during the nighttime hours, the desire for booze is destined to creep in once I come to a complete stop. But rather than give in, what I’ve opted to do instead is renew my faith in snacks. I’m talking about all of the fucking snacks, chief! Listen, it might sound counterproductive to focus so heavily on things like working out and diet when trying to stay sober, only to turn around and blow it by consuming beaucoup calories in junk food. But you have to stop and remind yourself that you actually have calories to spare now that you’re not drinking. Hell, there were plenty of days when I consumed in upwards of 1200+ calories a night in beer alone, so I think I can have a bowl of ice cream or cookies on occasion without being riddled with guilt. Now, I don’t always snack like a teenager. I typically reach for fruits and nuts to fulfill those needs, but I’m damn sure not above ordering a pizza if the mood strikes. I guess what I’m saying is that you have to allow yourself some dietary flexibility if you jump on the wagon. And if you can march through the first week without losing your shit, the next few should get easier.