NASA Captures Images Of A ‘Sharkcano’ Eruption From A Shark-Infested Volcano: Internet Reacts 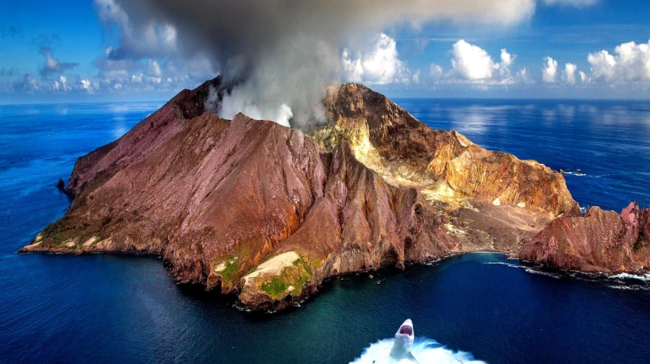 Back in 2020, it was reported that multiple species of shark were living inside the Kavachi Volcano in the Solomon Islands, 60 feet below the surface of the Pacific Ocean. Thus the volcano was given the nickname “sharkcano.”

“I thought it sounded like a sci-fi movie. It’s an amazing find,” marine ecologist Michael Heithaus of Florida International University said at the time.

Or an Austin Powers movie. But no, these sharks living inside the active volcano don’t have laser beams attached to their heads.

These sharks may have no pressing concerns than Dr. Evil manipulating them these days as their “sharkcano” recently erupted.

And it was all captured from space by the folks over at the NASA Goddard Space Flight Center.

NASA captured images of a “sharkcano” erupting in the Pacific Ocean

“You’ve heard of sharknado, now get ready for sharkcano,” NASA wrote on Twitter. “The Kavachi Volcano in the Solomon Islands is home to two species of sharks. It’s also one of the most active submarine volcanoes in the Pacific, seen here erupting underwater by Landsat 9.”

🦈 You’ve heard of sharknado, now get ready for sharkcano.

The Kavachi Volcano in the Solomon Islands is home to two species of sharks. It’s also one of the most active submarine volcanoes in the Pacific, seen here erupting underwater by #Landsat 9.https://t.co/OoQU5hGWXQ pic.twitter.com/vEdRypzlgi

NASA reported in a recent article that Kavachi Volcano, one of the most active submarine volcanoes in the Pacific Ocean, actually began the process of erupting in October of 2021.

Previous large eruptions were also observed in 2014 and 2007, but it erupts on some level almost continuously,

On Wednesday, The Weather Channel published a video of the “sharkcano” eruption.

“It’s really not yet known why they are there,” Professor Heithaus said in 2020. “It could be something to do with reproduction, or who knows what else is living in there… maybe they’re just sniffing out a meal.”

Don’t worry about the sharks’ safety though when the volcano erupts. According to Heithaus, “Sharks have incredible sensory systems. Like many other species they have the ability to detect changes in the environment before we do. They head for deeper waters before hurricanes hit—probably because they can detect changes in the atmospheric pressure. For eruptions, we don’t know but they might sense vibrations in the water or detect some of the sounds that come before an eruption.”

As one might expect, this news of a “sharkcano” eruption caused quite a stir on social media.

If kaiju come up out of this volcano, I'm wondering if I'm too old for mecha pilot training these days...

If you had 'sharkcano' on your 2022 bingo card you automatically win. pic.twitter.com/LqsW07K6mi