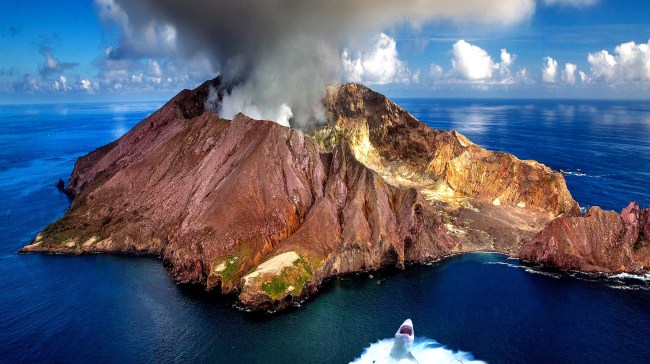 “I thought it sounded like a sci-fi movie. It’s an amazing find,” said marine ecologist Michael Heithaus of Florida International University when he learned sharks were living inside one of the world’s most active submarine volcanoes.

Does it though? Does it really?

The truth of the matter is that several species of shark, from reef sharks to hammerheads to scalloped hammerheads, are living inside the Solomon Islands’ Kavachi volcano located 60 feet below the surface of the Pacific Ocean.

“Extreme environments are something they can clearly handle; whether it’s a volcano or surviving thousands of meters underwater,” said Heithaus.

He’s not kidding about this being an extreme environment, the temperatures inside the active volcano can reach near the boiling point.

“It’s really not yet known why they are there. It could be something to do with reproduction, or who knows what else is living in there… maybe they’re just sniffing out a meal.”

Professor Heithaus believes that sharks have a “sixth sense” that detects changes in the Earth’s magnetic field and alerts them to when an eruption is about to occur.

“Sharks have incredible sensory systems,” Heithaus told Newsweek. “Like many other species they have the ability to detect changes in the environment before we do. They head for deeper waters before hurricanes hit—probably because they can detect changes in the atmospheric pressure. For eruptions, we don’t know but they might sense vibrations in the water or detect some of the sounds that come before an eruption.”

So there you go. Sharks, living inside active volcanoes, is a thing in 2020. Surprised?