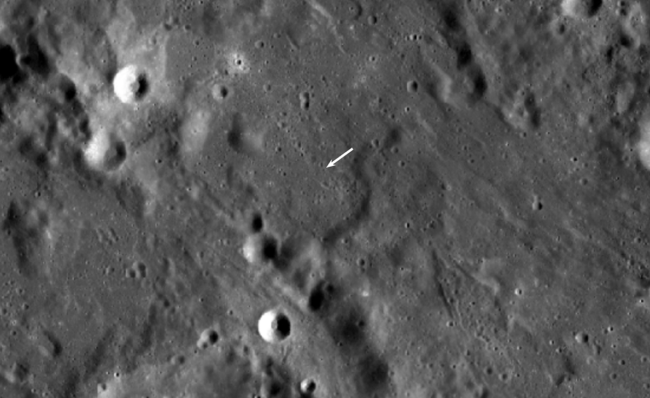 Astronomers recently discovered what NASA is calling a double crater left on the moon’s surface.

Images of the double crater were captured by NASA’s Lunar Reconnaissance Orbiter which has been circling around the moon taking photos since 2009.

NASA said in a new report that late last year a rocket body was on course to collide with the moon, but the origin of the rocket body remains unknown.

The impact occurred on March 4, 2022, but the location wasn’t spotted by the Lunar Reconnaissance Orbiter until months later.

The two overlapping craters are about 58.5 yards and 52.5 yards in diameter.

NASA scientists are unsure from which direction the rocket impacted the moon and why the impact created two distinct craters rather than just one.

“It’s cool, because it’s an unexpected outcome,” said Dr. Mark Robinson, a professor of geological sciences at Arizona State University who serves as the principal investigator for the camera aboard NASA’s Lunar Reconnaissance Orbiter, reported the New York Times. “That’s always way more fun than if the prediction of the crater, its depth and diameter, had been exactly right.”

In January, Bill Gray, developer of Project Pluto, originally stated that it was the second stage of a SpaceX Falcon 9 rocket that was going to crash on to the moon. That, scientists now know, was incorrect.

University of Arizona astronomers then believed it could be part of a Chinese rocket that was on course to impact the dark side of the moon, but a Chinese official denied that was the case.

Considering the massive amount of junk humans have left just floating out there in space it could be some time before the rocket that caused the double crater on the moon’s surface is identified.