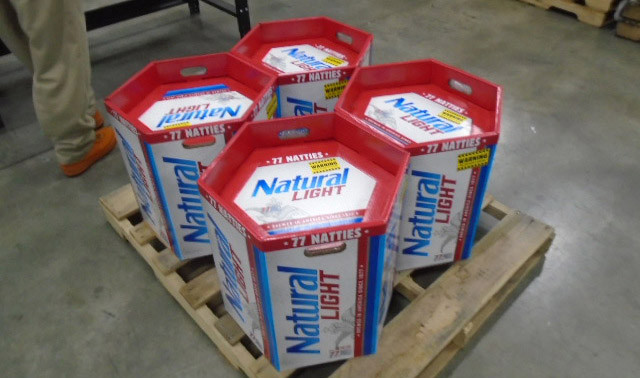 Natural Light is getting crazy AF again for spring break, guys — but what’s new, right? The best beer in the world (in my personal opinion), decided to bring back its massive 77-pack for the blowout celebration, offering that big pack for a limited time only on South Padre Island, TX. If you’re an American, you’re as pumped about this news as I am.

The news of Natty Light’s 77-pack comes after its release of a new Strawberry-Lemonade beer that’s aimed at bros sipping on the beach, on boats, in warm weather and, well, with their taco meat spilling out of their top buttons of their shirts or tanks. I already talked about how stoked I am to try that beer the other day, and this 77-pack is a must-have for any wild party.

Just when you thought it couldn’t get any better…
Introducing the Natural Light Variety 77-pack. Available for a limited time only during Spring Break on South Padre Island, TX. #nattylight #naturdays #nattyice pic.twitter.com/ZC6CyxlHxd

Included in Natural Light’s 77-pack will be the original Natty Light, the new Strawberry-Lemonade beer and the brand’s Natty Ice — which make for a trio that’s sure to lead to some epic stories. Just remember to drink responsibly out there in the wild, bros.

For those who remember, Natty Light released a similar 77-pack in 2018, with the entire package weighing an impressive 65 pounds. That’s a helluva lot of beer to lug around, but it’s totally worth it.

Oh, and for those wondering how Natural Light landed on the random-ass number of 77 beers, it’s because the beer was founded all the way back in 1977. See, even when surrounded by all that tasty booze, they still know how to be pretty clever.

If you’re all about the story — and you should be while drinking — the Natural Light 77-pack is about to be your best friend while you ride inflatable alligator floaties around on some lake in South Padre. Ah, what a life that sounds like right now.