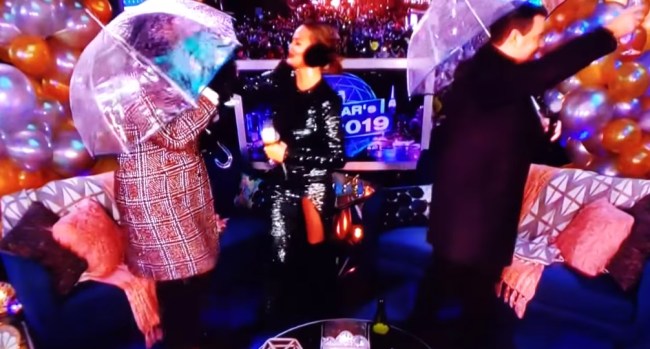 Chrissy Teigen was a co-host of NBC’s New Year’s Eve coverage along with Leslie Jones and Carson Daly. The 33-year-old model discussed her “vaginal steaming” on during the New Year’s Eve TV special and NBC featured this image of Teigen’s treatment.

face mask / heat pad / vagina steam no I don’t know if any of this works but it can’t hurt right? *vagina dissolves*

Some parents were not thrilled that a New Year’s Eve special on NBC promoted vaginal steaming.

AND @NBC showed a photo of said vaginal steaming. What the hell is wrong with you people?? How is this family appropriate? I’m confused…

Then at midnight, Teigen and Jones welcomed 2019 with a tender embrace and Leslie nearly gouging out Chrissy’s eye. The Saturday Night Live star accidentally poked Teigen in the head with just the tip of the umbrella.

Teigen assured everyone she was okay and was going back to Times Square to find her eyeball.

7am. Heading back out to time’s square to find my eyeball

Leslie Jones apologized for assaulting Teigen with an umbrella.

Ugh I can’t believe I hit @chrissyteigen in face!! Lordt!! I love you boo!! So sorry!! #thatswhyihateumbrellas

EYE’M FINE BABY I hug too hard what can I say ❤️❤️❤️ pic.twitter.com/74ddgxQlsr

The moment became a meme.

I'M SORRY CHRISSY I'M SO SORRY BUT I HAD TO pic.twitter.com/N6OjgZ0BIi

While NBC was busy watching Teigen nearly become a pirate, the network forgot to show the ball dropping in Times Square, which is pretty much the reason to watch one of these New Year’s Eve TV shows. There wasn’t even a countdown clock and viewers called the broadcast a “trainwreck” and a “dumpster fire” combined. Some would say that NBC dropped the ball.

me waiting for the ball to drop on #NBC only to realize it’s already 12? pic.twitter.com/R5PV0uUMfp

Watching #NBC New Years special is like watching a #trainwreck and a #dumpsterfire combined.