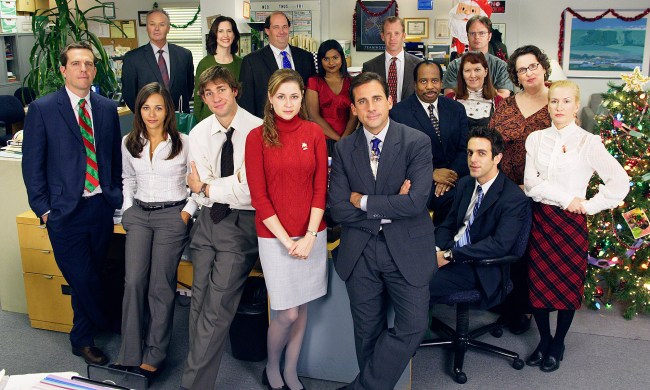 In case you hadn’t noticed, reboots are all the rage these days on TV. Just this week it was revealed that NBC Universal will be rebooting Saved By The Bell and Battlestar Galactica when their new streaming service Peacock kicks off in 2020.

Other shows that have been rebooted over last couple of years or are expected to be rebooted in the coming year include The $100,000 Pyramid, Alice, Are You Afraid Of The Dark?, Animaniacs, Beverly Hills 90210, Boy Meets World, Charmed, Double Dare, Dynasty, Full House, Lost In Space, MacGyver, Mad About You, Magnum P.I., Murphy Brown, One Day At A Time, Party Of Five, Roseanne, Rugrats, The Sopranos, Star Trek, The Twilight Zone, Twin Peaks, Veronica Mars, Will & Grace, and The X-Files.

One show that isn’t on that list, but millions of TV viewers everywhere wishes was is The Office.

Someone else who wishes it was, according to Deadline, is NBC Universal, who would really like it to be on their to-do list when things get rolling with Peacock.

“It is my hope and goal that we do an Office reboot,” NBCU’s Bonnie Hammer, Chairman of Direct-to-Consumer and Digital Enterprises, told Deadline.

NBCU recently acquired streaming rights to NBC’s The Office for $500+ million, taking it away from Netflix where the series starring Carell has flourished. “The Office comes back to us in January 2021. It is my hope that we can figure what that great reboot would be,” Hammer said, adding, “We are having conversations.”

An Office reboot would fit into Peacock’s strategy for original scripted series, including reboots, in which “we want there to be some connective tissue to what we also have in the library,” Hammer said.

Before we all get our hopes up though, this isn’t the first time we’ve heard news like this regarding The Office.

Sources confirm to TVLine exclusively that the Peacock network is eyeing a continuation of the beloved workplace comedy for the 2018-2019 season. The revival would once again be set at Dunder Mifflin’s Scranton, PA., branch, and feature a mix of new and old cast members. Steve Carell, who starred as the branch’s regional manager, Michael Scott, for seven of the comedy’s nine seasons, will not be involved in the new series. The search for a new RM/boss is said to be already underway.

That didn’t happen, but around that same time NBC Entertainment chairman Bob Greenblatt did express interest.

“We often talk about The Office, I’ve talked to Greg four times over the past few years. It’s always, ‘maybe some day but not now,’” Greenblatt said in an interview with Deadline during NBC’s portion of the TCA press tour. “There is certainly an open invitation but we don’t have anything happening right now. If he wants to do it, I would do it.”

More 30 Rock AND The Office?