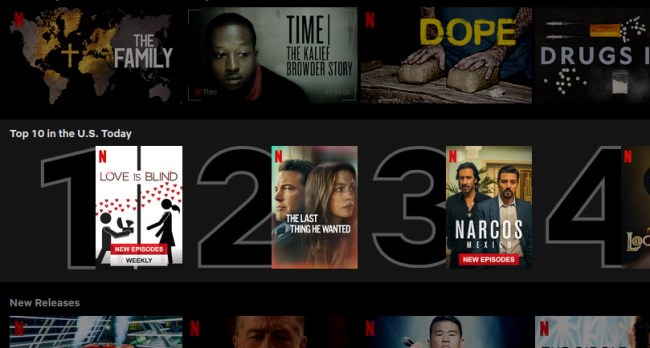 In the increasingly more competitive world of streaming services, Netflix is finally going to let its viewers know, officially and in real time, what popular shows people are watching the most.

This new feature is an obvious attempt to differentiate longtime streaming leader Netflix from the many streaming services that have been or will be popping up such as Disney+, HBO Max, Apple TV+, and Peacock, as well as previous streaming standbys like Hulu and Amazon Prime.

“This new row – complete with its own special design – will enable you to see what is most popular on Netflix in your country. It will be updated every day and the position of the row will vary depending on how relevant the shows and films are to you,” Cameron Johnson of Netflix Product Innovation revealed in a press release.

“In addition to the overall top 10 list, you’ll also be able to see the top 10 most popular series and top 10 films when you click on the movies and TV shows tabs.”

“Shows and films that make these lists will also have a special ‘Top 10’ badge, wherever they appear on Netflix. That way you can easily see what’s in the zeitgeist, whether you’re browsing by genre or through your personal list – or when searching for specific shows or films.

“We’re constantly looking for ways to make Netflix better. It’s why we’ve been experimenting with top 10 lists in Mexico and the UK for the last six plus months. Members in both countries have found them useful, so we are now rolling them out to even more.

“When you watch a great movie or TV show, you share it with family and friends, or talk about it at work, so other people can enjoy it too. We hope these top 10 lists will help create more of these shared moments, while also helping all of us find something to watch more quickly and easily.”