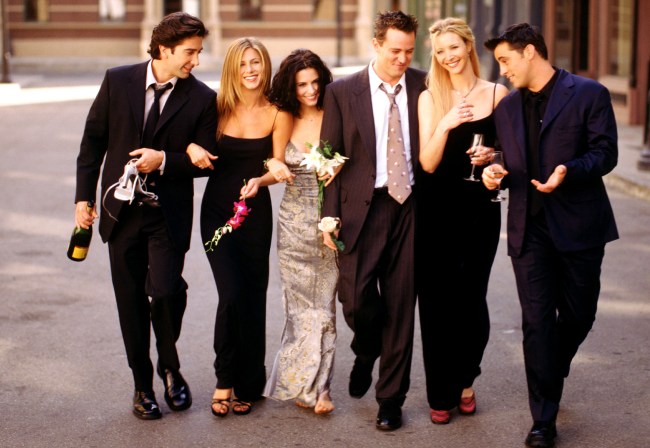 For years, several members of the original cast of Friends have said that a reunion show or movie was never going to happen.

It’s certainly not like any of them need the money. Last we checked, as of 10 months ago it was reported that each cast member still makes around $20 million per year from the show – their cut of the $1 billion Warner Bros. makes annually on Friends. (Bet Tiffani Thiessen wishes she had gotten the role of Rachel Green now, huh?)

“To see what those characters are doing now, I think it’s almost a case of that the book is better than the movie. Everyone’s imagination of what they’re doing now is better,” he told Australia’s 97.3 FM.

Friends co-creator Marta Kauffman has also said she had no interest in a reunion.

However, as Conan O’Brien so astutely pointed out in an interview with Lisa Kudrow where they discussed a possible Friends reunion, “There’s a lot of money to be had there.”

David Schwimmer and Jennifer Aniston have also claimed to have little interest in reviving their Friends characters. Aniston did qualify her sentiments, recently telling Ellen Degeneres she would not do a reboot, but “would love for there to be something, but we don’t know what that something is. So we’re just trying. We’re working on something.”

This week we may have gotten an idea of what that “something” may be.

The Hollywood Reporter reports that apparently all that money Conan refered to might be just too good to pass up.

As mega-hit Friends continues to celebrate its 25th anniversary, sources tell The Hollywood Reporter that the six core stars and the creators of the NBC comedy from Warner Bros. TV are in talks to reunite on HBO Max.

Talks are currently underway for an unscripted reunion special that would feature Jennifer Aniston, Courteney Cox, Lisa Kudrow, Matt LeBlanc, Matthew Perry and David Schwimmer, as well as series creators David Crane and Marta Kauffman. Sources caution that a deal is far from done and agreements with cast and creatives still need to be hammered out. When and if deals are completed, the challenge then becomes sorting out everyone’s schedules. Of course, the talks could fizzle and the whole concept could fall apart.

A Friends reunion would certainly be a tremendous marketing tool for HBO Max as the upcoming streaming service prepares for its launch in May 2020. It would also coincide nicely with the sitcom moving from Netflix, its home for the past several years, to HBO Max after WarnerMedia reportedly paid $425 million for streaming rights to the show for the next five years.