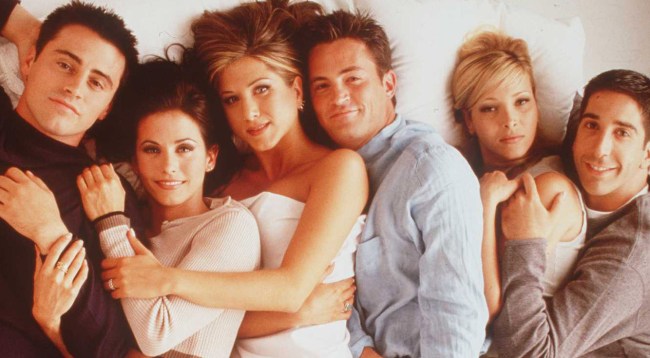 For a couple of reasons, NBC’s big sitcom hit of the 1990s, Friends, is experiencing something of a revival of late.

The first reason for the revived interest in Friends is the fact that Netflix recently released all 10 seasons and 236 episodes on to the United Kingdom (and trolled them about it). Which meant that all sorts of people who didn’t watch Friends the first time around are now being introduced to Rachel and the rest of the gang. (And making some very fascinating observations about the show and how it was a whole different world back then.)

The second reason is that in January someone fooled a good portion of the internet into believing that a Friends reunion movie was in the works with a fake trailer they created.

Pretty good, right? Well, it turns out that several members of the Friends cast also took a look at it and had thoughts. Among those was Phoebe Buffay and Monica Geller, I mean Lisa Kudrow and Courteney Cox.

While discussing the fake Friends trailer with Conan O’Brien, Kudrow had this to say about a potential reunion.

“Nobody said it had to be a comedy,” Conan reminded Kudrow.

So yeah, bummer, right? Well, to throw even more cold water on the idea of a potential Friends reunion, earlier this week Joey Tribbiani, I mean Matt LeBlanc, was a guest on Australia’s 97.3FM “Bianca, Terry & Bob” show and once again the subject came up.

“I understand that people really want to see that reunion but that show as about a finite period in those characters lives, between 20 and 30,” he said. “To see what those characters are doing now, I think it’s almost a case of that the book is better than the movie. Everyone’s imagination of what they’re doing now is better.”

He also quipped that the lives of the six friends may not be as interesting as they were all those years ago.

“I don’t think anyone wants to see Joey at his colonoscopy!” he said to the co-hosts. “I think it’s better for people to just leave it.”

Yeah, yeah, yeah. We get it. Kudrow doesn’t want a reunion. LeBlanc does want one. Friends co-creator Marta Kauffman doesn’t want one. David Schwimmer doesn’t seen any reason to do it. And Jennifer Aniston also has little interest in reviving the characters.

I wonder what Chandler thinks. I mean Matthew Perry. Think he’d be down?

I totally bet he’d do it.