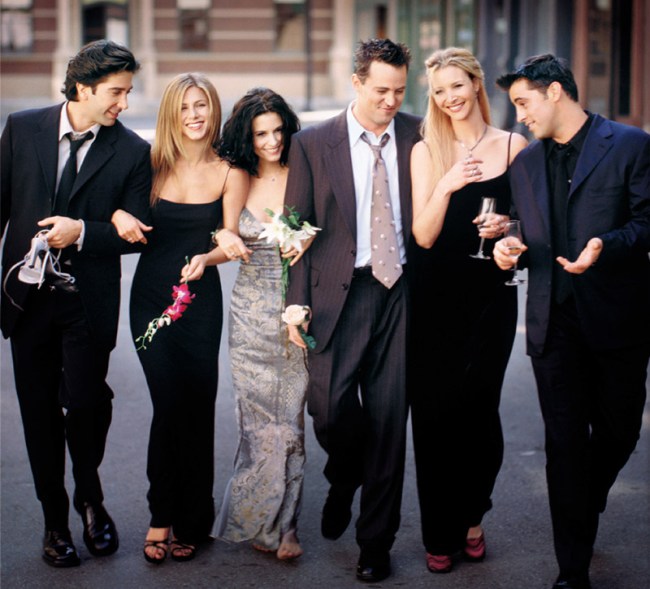 Friends is once again back in the news almost 14 years after it went off the air thanks to Netflix releasing all 236 episodes in the UK this month. Mostly it’s because the people who are watching the show for the very first (yes, they actually exist) can’t believe some of the things they are seeing.

They have made many excellent observations that someone who watched Friends back in the day or in reruns probably never noticed. Mostly because it was obviously a very different world in the years 1994 to 2004.

So first things first… my god the hair

Another observation from watching Friends through for the first time. Why do none of the friends try to help Phoebe through her grief and with her childhood traumas? It's like they don't care. Poor Phoebe.

Watching FRIENDS on Netflix and I have questions: 1) was there no room in the wardrobe budget to purchase bras? 2) how cold were those sets?

I'm watching Friends all the way through for the first time and Ross is an absolute ass. WHY DO PEOPLE LIKE HIM?

Apparently Netflix has been paying attention to all the Friends chatter and decided to have a little fun with millennials by trolling them with some A+ guesses as to what Friends episodes would be about if it was filmed today.

FRIENDS 2018 PLOTLINES
-Joey eats Tide pods, goes to hospital (guest star Ellen Pompeo)
-Chandler won’t shut up about how funny his Vines were
-Ed Sheeran cameo interrupts Phoebe’s Central Perk set
-Ross gets everyone into Bitcoin
-The One Where The Gang Realizes Their Privilege

FRIENDS 2018 PLOTLINES
-Joey eats Tide pods, goes to hospital (guest star Ellen Pompeo)
-Chandler won't shut up about how funny his Vines were
-Ed Sheeran cameo interrupts Phoebe's Central Perk set
-Ross gets everyone into Bitcoin
-The One Where The Gang Realizes Their Privilege

Naturally, this spawned TONS of other ideas for 2018 Friends episodes. Here are a few good ones…

Rachel tries to get off the plane by screaming about broken phalange; is added to No-Fly list

Personally, I still want the episode where we find out that Joey and Monica are drug addicts.

And no, there isn’t actually going to be a Friends reunion movie, people, so just stop.