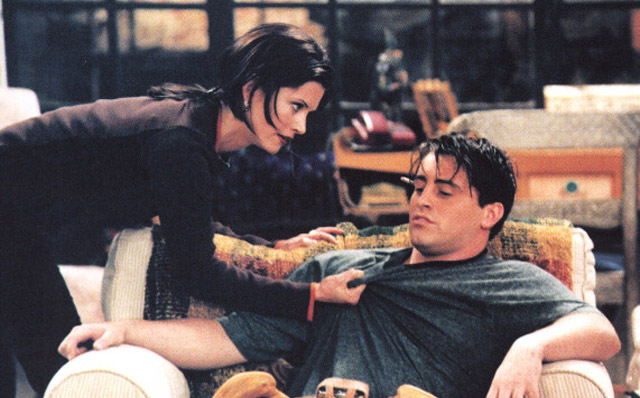 Fan theories about television shows are always fun. Because (1) it takes characters we know and love and gives them even more depth, and (2) people can just make up the most outlandish shit about a character and sometimes it actually makes sense.

Game of Thrones is easily the most popular show for fan theories these days — mostly because people are trying to figure out what’s coming next.

But pretty much any TV or movie series is ripe for this sort of thing. Especially if it’s been around for a long time. Movies like Toy Story and Star Wars are perfect examples.

Another example is one of the most popular sitcoms ever, Friends. Some diehard fans of the show are relentless, such as the person who tracked down “Ugly Naked Guy.”

So this new fan theory that Monica Geller and Joey Tribbiani were actually drug addicts fits right in with the fun.

In fact, Reddit user lolalodge is convinced that the two of them were hooked on drugs during the entire 10 season run.

Here’s how she breaks it down…

Alright, so Monica is a restaurant chef, usually a Sous Chef or even head chef most of the time in some rather high end restaurants in NYC.

First, most people that work in the restaurant industry tend to gravitate towards some sort of substance since the job is very high stress.

But that’s not even my reasoning. See, head chefs and sous chefs in high end restaurants in NYC tend to get paid a lot, like $50-$100 dollars an hour a lot.

Monica also lives in a rent controlled apartment that she illegally sublets from her dead grandmother, she even has a roommate to share the bills with. She doesn’t own an obscene amount of clothes or anything, doesn’t go out to bars regularly, so where exactly does her money go?

Cocaine, which she stashes in the closet by the big windows, which is why when Chandler opens it in the last season, she flips out because she doesn’t want him to find her cocaine stash.

It also explains why Monica is so high energy and high strung.

As for Joey, Joey pretty much smokes weed all day. That’s why he’s always hungry, can eat a ton of food and is constantly napping and is kind of spaced out and a lot of what other people say goes “whoosh” right over his head.

Edit: not saying it’s definitely the case, just that’s one way the show could be interpreted.

Edit II: forgot to add Monica doing cocaine also explains her rapid weight loss back when she was a teenager.

So what do you think? You buying it?

I mean, we already know for a fact that Chandler Bing (I mean, Matthew Perry) was so high on the show that he doesn’t even remember three seasons, but what about the others? Hmmmm….