ALLLRIGHTY THEN! A New ‘Ace Ventura’ Movie Is In The Works 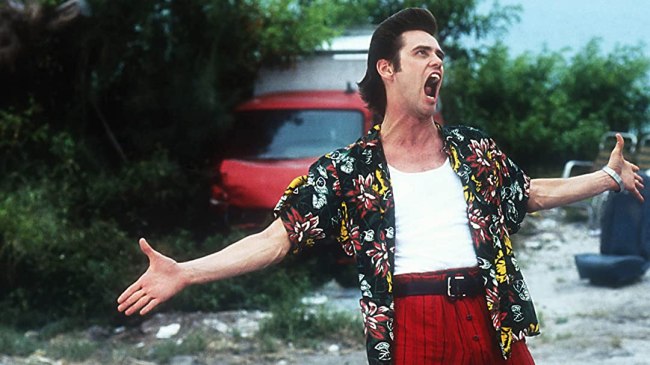 Growing up in the 90s, you were either an Adam Sandler Kid or a Jim Carrey Kid. I was, very much, a Carrey kid. From his historic 1994 run of The Mask, Ace Ventura, and Dumb and Dumber, to his late-decade classics like Liar Liar, The Truman Show, Bruce Almighty — there were many-a-nights of Jim Carrey-fueled laughs in the Italiano household.

Despite both the massive success of Carrey’s 90’s catalog and the age of reboots, spin-offs, and sequels that we’re living through, it’s actually sort of surprising that the comedy legend hasn’t revisited any of his previous films (except for Dumb and Dumber To, but the less said about that, the better).

If we’re lucky, though, that looks set to change, as reports indicate there is a third Ace Ventura film in the works.

“We’re pretty excited about our franchise developments with ‘Exorcist’ and the ‘Ace Ventura’ franchise – its noticeable from the 3 million fans chatting on the official Facebook page for Ace Ventura that audiences are clamouring for a third installment… During COVID, audiences have been in love and are thrilled to have beloved characters brought back with new stories. Ace Ventura will see a new day at Amazon as a major motion picture/theatrical with the Sonic the Hedgehog writers.” [via Park Circus]

At this time, while Carrey has not been confirmed to return, it’s hard to imagine an Ace Ventura film without him. Plus, Carrey knows the Sonic the Hedgehog writers quite well, as he starred in the villainous Dr. Robotnik in that film. As for the next time we’ll see Carrey, he’s set to reprise his role of Dr. Robotnik in Sonic the Hedgehog 2, which is currently filming.