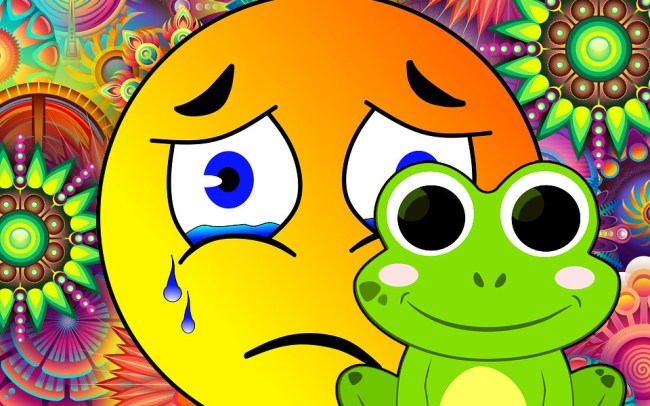 “I was crying really hard, yelling ‘I’m so sorry’ over and over,” said Barrett Pall about his first time inhaling illegal toad-venom smoke through a pipe.

If that sounds like a good time to you, boy, are you in business. Because this new and, as I mentioned, totally illegal psychedelic drug that Pall smoked is currently making the rounds “among well-off New Yorkers,” reports the New York Post.

The toad venom in question is extracted from Colorado River toads, also known as Sonoran Desert toads, and reportedly “leaves users immobile and unaware, and can cause extreme emotional reactions, euphoria and vomiting.”

The high (if you want to call it that) comes on almost immediately and lasts around 45 minutes, so you might not want to try it out for the first time at a party.

“It’s such an intense experience that, in most cases, doing it at a party isn’t safe,” said Alan K. Davis, a clinical psychologist and assistant professor at the Psychedelic Research Unit at Johns Hopkins University. “It’s not a recreational drug.”

I just said that.

There’s also the chance that you could get a 10-year prison sentence just for possession of the venom, known as bufo alvarius, so that’s also important to know.

Not that those issues have stopped people from holding parties where everyone in attendance uses it. For example, the Post reports that 21 people dressed in white robes (because of course they were) recently got together at a mansion in the Hamptons to do such a thing.

While someone beat a drum in the background, the leader read a prayer about love and held the pipe up to each guest’s lips.

“Some people moaned, cried or convulsed on their backs,” said one attendee who asked to remain anonymous, citing legal reasons. “Others… started dancing, singing or chanting.”

Also, according to Davis, “If people get dosed too high, they can ‘white out’ and disassociate from their mind and body. Anxiety can persist for days, and we’ve heard of people going to the emergency room.”