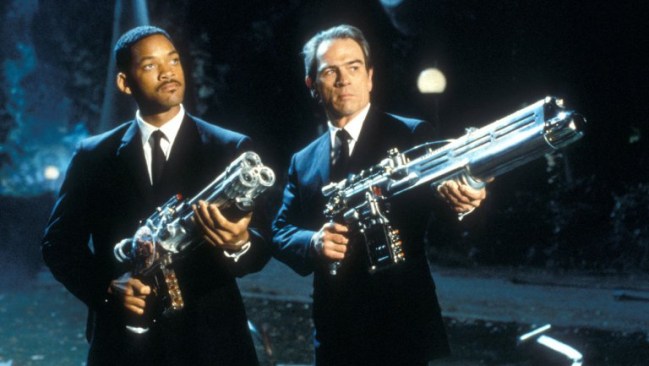 Afraid of taking chances, Hollywood will once again go to the graveyard of once popular movies and unearth a film franchise that has lied dormant for decades. The latest successful movie to be a reboot is “Men in Black.” Numerous reports confirm that a “Men in Black” spinoff is really happening, however, the new movie will focus on new characters other than Agents K and J. That’s right, you’ll get a new “MiB” but it won’t have Tommy Lee Jones and Will Smith. That’s like having a “Bad Boys” movie without Will Smith and Martin Lawrence or “The Fresh Prince of Bel-Air” without Will Smith and Carlton Banks.

Sony Pictures, which has made more than $1.5 billion globally off the “Men in Black” franchise, are pleased to announce that Steven Spielberg is set to executive produce the film. “Iron Man” and “Transformers: The Last Knight” writers Matt Holloway and Art Marcum have already written the script. Sony had considered a “21 Jump Street” and “Men in Black” crossover movie, but movie execs nixed that idea.

Producer Walter Parkes said, “It’s so rare to get to the end of the script and know you’re holding a movie in your hands, but Art and Matt have written a spinoff that somehow is true to the core of the ‘MiB’ world and yet expands the franchise to a fresh new place.”

Sony is fast-tracking the spinoff and already have slotted it for a May 17, 2019 release date, putting it up against Lionsgate’s “John Wick: Chapter 3.”

So here come the Men in Black without Will Smith and Tommy Lee Jones.