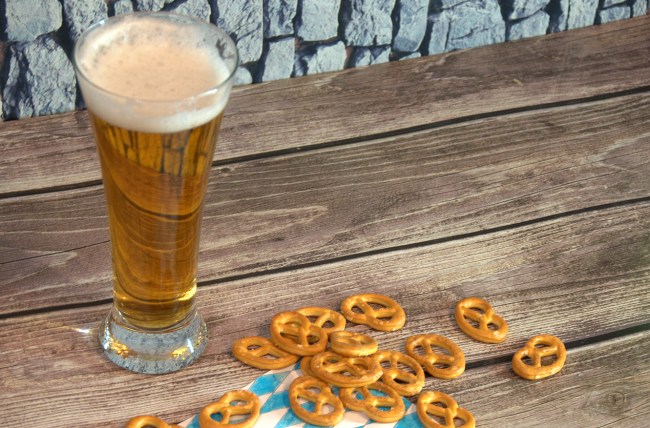 Every college has at least one bar near campus that primarily caters to a clientele that could not care less about things like “ambiance” and “hygienic cleaning procedures” as long as it gives them access to cheap drinks poured by a bartender unfamiliar with the word “overserved” and a jukebox that doesn’t have a limit on how many times “Wagon Wheel” can be played in a row.

These are the kind of dives that you’ll never see Guy Fieri visit, because if he did, all of his interactions with the staff would end with “Look, if you’re not going to order anything, you need to leave” and almost any customer that was interviewed would just yell unintelligibly at the camera before puking all over it.

That’s the general vibe you’ll encounter if you ever walk into a joint on the edge of Boston called Mary Ann’s, whose basement has a claim to fame as the former base of operations for the crew that helped Henry Hill orchestrate the BC men’s basketball points shaving scandal that was briefly alluded to in Goodfella’s.

MA’s (as the cool kids call it) also features a men’s bathroom with a single urinal situated directly across from a toilet with nary a stall to be found, and taking a dump on a Friday night was both a rite of passage and a necessity for anyone dealing with a prairie dog that couldn’t be forced back into hibernation. While I admit I can’t verify this claim, it was also rumored to be the only bar in Boston that managed to skirt a law requiring all drinking establishments to serve food, although it technically did thanks to a vending machine tucked away in a corner that I never saw anyone use during my many, many visits.

There’s nothing I adore more than a good loophole, and as a result, I was very excited when I heard Andrew Cuomo issued a decree banning bars and restaurants from serving drinks to customers unless they also place an order for food.

NEW: @NYGovCuomo announces “3 strikes and you are closed” initiative which will shut down bars and restaurants with three or more violations for failing to enforce social distancing.

In addition, restaurants will no longer be able to serve alcohol to those not ordering food.

In addition to spending the past couple of months taking full advantage of the newfound ability to grab a beer or cocktail to accompany me during my semiweekly treks into the outside world, I’ve also capitalized on the luxury of now being able to have booze delivered directly to my doorstep. However, all of those orders must be accompanied by food, which is why one brewery I’ve frequently patronized charges me $1 for the tiny bag of Doritos that accompanies the beer they bring me.

As a result, I wasn’t as worked up about the new regulations as some people were, as I knew it was only a matter of time until places started to get creative—like Buffalo’s The Lafayette, which debuted a dollar menu in order to comply.

Cuomo said bars could only stay open if they served food.

Here is a menu from a bar upstate. pic.twitter.com/eWwlohvDvf

The Home Team Pub in Liverpool harnessed a similar strategy.

It’s officially the summer of the dollar menu in New York State. pic.twitter.com/4FXc460tnG

The Hamburg Brewing Company kept its menu largely unchanged with the tiny exception of a new addition with a noticeably lower price point than its other offerings. 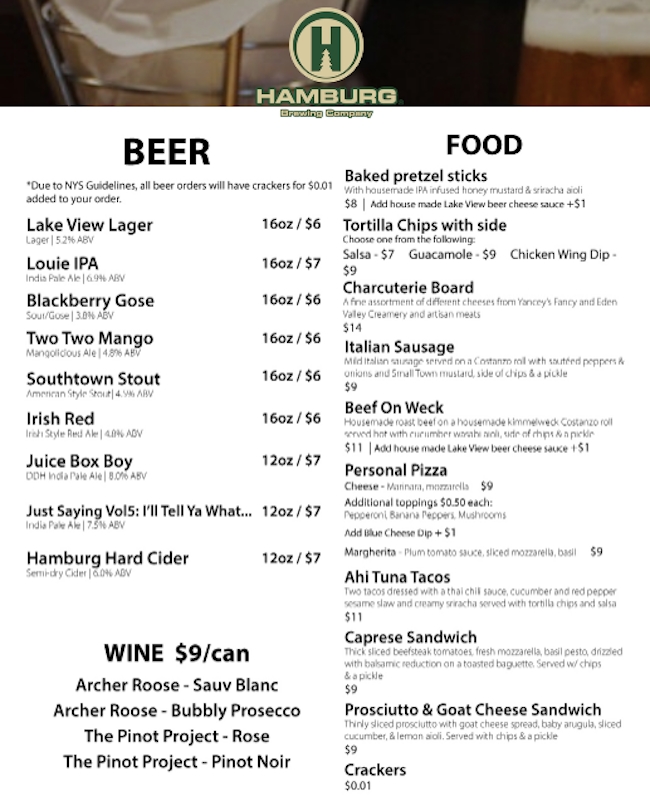 Finally, there’s The Village Line in Kenmore, which voiced its displeasure with the new policy by sending a subtle message to Cuomo. 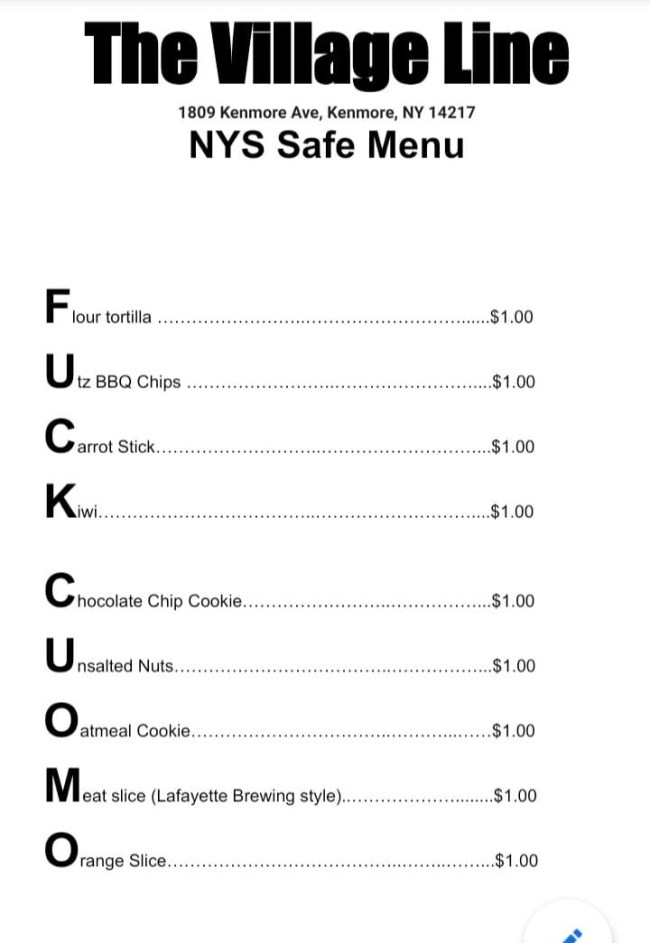 According to WKBW, these menus may not actually be an adequate solution, as the rule apparently states that all food orders must offer a “sufficient serving for all in the party” in order to be deemed acceptable. I eagerly await the incredibly dumb court battle that’s just begging to come out of this.