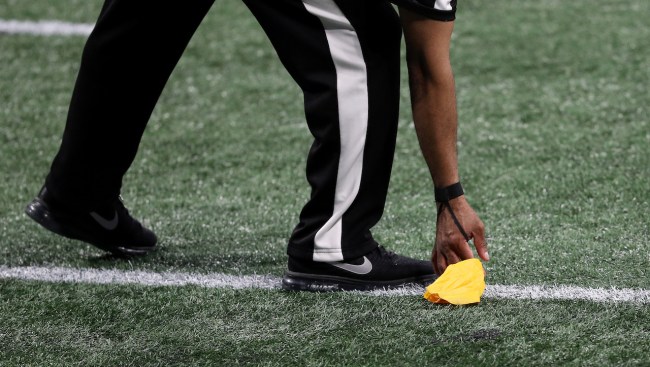 Thought this weekend’s NFL action was significantly smoother than the first two? That’s because Sunday’s Week 3 NFL action saw a significant drop in penalties after the National Football League and their referees held a discussion about the frustrating amount of flags.

On Thursday, face-of-the-league Tom Brady tweeted that he was turning off the Thursday Night Football game between the Jacksonville Jaguars and the Tenessee Titans due to the number of penalty flags that were being thrown.

“Too many penalties. Just let us play!!!!” Brady tweeted.

The NFL obviously agreed with Brady’s evaluation of the leagues refereeing thus far this season, as the Al Riveron, the NFL’s senior vice president of officiating, held a conference call with the league’s referees on Saturday to discuss “the spike in offensive holding calls,” according to Pro Football Talk.

Kevin Seifert of ESPN notes that there were 41 offensive holding calls in 14 games on Sunday. That average of 2.9 per game is down from 5.7 per game over the first 33 games of the year.

The number of holding calls went up after an offseason point of emphasis to call holding on offensive linemen performing “lobster blocks” on the backside of running plays.

Riveron said on the call that linemen must still refrain from blocking outside a defender’s frame, but said officials should give linemen more time to get inside the frame before throwing flags. [Pro Football Talk]

The NFL gave their referees an instruction, and ultimately, that instruction led to a drop in penalty flags, which is a win for all of us. For the non-maths wizards out there — much like myself, as I used an online percent-change calculator to figure this out — that’s a 49% decrease.

While there’s obviously no indication of whether Brady’s public frustration directly influenced the league’s decision-making process on the issue of penalties, it’s certainly quite coincidental that the conference call came less than 48 hours after his tweets, despite the fact that fans had been complaining about the inordinate amount of penalties since Week One.

Either way, regardless of how it happened, let’s just be glad that it did, as the pace of play in the NFL’s early stages was generally brutal prior to the offensive holding course correction.