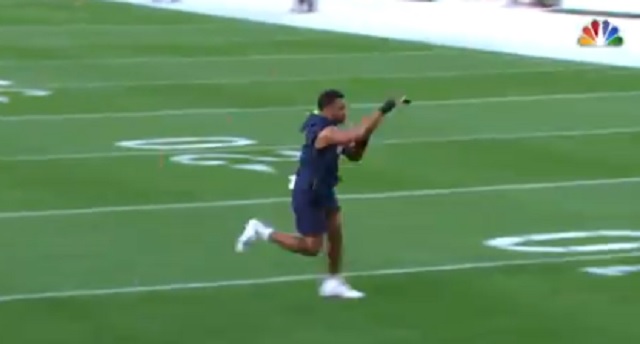 Russell Wilson may not be able to throw a football for several weeks due to an injured finger but that doesn’t mean he can’t get in some practice reps on the field.

Before Sunday’s Steelers-Seahawks game, Wilson ran a full two-minute drill by himself without a football to keep himself mentally in game shape.

Russell Wilson, on IR for the first time in his career, is on the field running a mock 2-minute drive by himself during pregame warmups. Calling/changing plays at the line of scrimmage and all. pic.twitter.com/3bJ6jGt873

Russell Wilson getting in a little work during pregame in Pittsburgh pic.twitter.com/QTYOlB7XAZ

Russell Wilson's pregame routine is unlike any other.

Weird how the cameras are on him… Almost like he’s putting on a show? https://t.co/bBXk24LwXG

I mean, there's definitely a reason this guy is a All-Pro / Super Bowl QB, but this seems a bit weird… https://t.co/hT6XRxBI8p

Drill isn’t realistic until he takes a bad sack https://t.co/Wg1nnLq8bL

Russ is the cringiest player in the NFL https://t.co/shzDD6L3Qq

So he’s calling audibles against an imaginary defense he is making up himself. Yeah that’s not weird at all https://t.co/KyFlLorte4