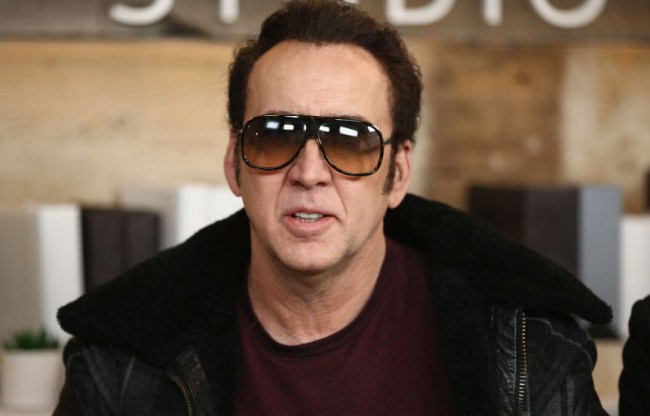 It’s the summer of 2019. In the offices of a Hollywood studio sit a slew of high-powered executives huddled around a long mahogany desk, bathed in the glow of the California sun that permeates through the windows. The room is silent, save for the ticking of a clock.

At the head of the table sits The Head of The Studio. In his hand, he swirls a glass of scotch and between his teeth is clenched an unlit cigar. He’s a hefty man; the buttons of his blue dress shirt with a contrasting white collar are strained to the point of bursting and becoming projectiles.

After what seems like an eternity of silence, he slams his fist down on the wood, rattling everything on it. A woman seated nearest him gasps.

“Dammit!” he bellows through clenched teeth. “What do I pay you all for?! You eggheads are supposed to be coming up with ideas that’ll make me millions—no, billions—of dollars but we’ve been sitting in here all day and the only ideas anyone’s had is a film about a cop who strictly adheres to the rules and a gritty reboot of The Brady Bunch! They’re both complete shit!”

Desk chairs creak as the executives nervously shift in their seats.

The Head of The Studio leans back in his chair.

“Listen, I’m sorry to be this way, but this is Hollywood. The entire world is waiting to pay us to tell them what to enjoy. It’s a heavy burden.”

One executive musters the courage to clear his throat and choke out a sentence.

“Well, uh, sir. What if—now hear me out—we made a movie based on things that we already know people like.”

“You mean like a board game or movies everyone has already seen, but with the gender of the main character switched?” asks The Head of The Studio.

“No. I mean something much broader, like the internet,” says the executive.

“The internet? That’s still a thing?”

“Yes sir, very much so,” another suit chimes in. “People use it all the time to communicate with each other about common interests.”

“I thought it was only for nerds and watching pornography,” says The Head of The Studio.

“For many people it is, but still others use it to bully strangers or talk about Nicolas Cage movies,” concedes the executive.

The Head of The Studio freezes. He slowly removes the cigar from his mouth.

Several days later The Head of The Studio and the executives reconvene in that same conference room. This time, however, there is an additional chair directly next to him at the top of the table.

“When Nic gets here I want everyone ready to pitch him some ideas. This could be big!”

The conference room doors swing open and through them walks Nicolas Cage. His eyes are hidden behind mirrored sunglasses.

The Head of The Studio rises from his chair.

“My pleasure. But call me Nic,” says Nic.

“Alright then. We have a seat for you right here, Nic.”

“I actually brought my own chair. My assistant is bringing it up in the elevator right now,” says Nic.

Again, the doors swing open and an ornately carved chair is brought into the room. The armrests are two roaring dragons.

“That’s a ceremonial chair from the Ming Dynasty,” Nic explains. “It’s made from a species of tree that’s been extinct for four hundred years. Ghost Rider paid for this thing.”

“Very nice,” says The Head of The Studio. “Well, now that you’re comfortable, let’s talk about why you’re here. We have some ideas for you, that we think you’ll love.”

The Head of The Studio nods at one executive who flips through a binder.

“I love that,” says Nic. “But I’ve spent my whole career playing characters. I just want to be Nic.”

The executive is puzzled.

“So…you want to do a documentary?” she asks.

“That’s not what he said,” The Head of The Studio quickly parrots.

“I want to do a film where I play Nic Cage,” says Nic.

“Well, we had another idea where you would play a down-on-his-luck actor who is invited to make a paid appearance at a Mexican billionaire’s party before the CIA informs you that the billionaire is actually the kingpin of a drug cartel.” says the executive.

Nic thoughtfully places his chin on top of his folded hands.

“Can the character be called ‘Nicolas Cage?'”

“Uh, sure?” says the executive.

“Then I’m in—if it doesn’t conflict with National Treasure 3.”

“We’ll work around that. We’ll shoot for March 19, 2021,” says The Head of The Studio. He rises out of his chair and extends his hand toward Nicolas. However, Cage doesn’t reciprocate.

“There’s one more thing I want,” Nic says. He takes off his glasses. He means business. “I want Quentin Tarantino to direct.”

There are murmurs throughout the conference room.

“Nic,” says The Head of The Studio. “Quentin usually likes to work on his own ideas. He also said he only plans on making ten movies. He’s made nine already. We can try, but I doubt he’d want to spend his tenth movie on something like this.”

“If we’re going to do this, I want Quentin involved,” says Nic.

“I have an idea,” says the studio executive. “Since you’re playing a down-on-his-luck actor, what if you’re a down on his luck actor who is trying to land a part in the next Quentin Tarantino film?”

Everyone’s gaze shifts to Nic. He stares at the ceiling, deep in thought while rubbing the heads of the dragons on his chair.

“I love it,” he says. “I think it will be a wonderful study on what it’s like to have to deal with the unreasonable weight of massive talent.”

“I think we’ve got a title!” says The Head of The Studio.

“Nic, here’s to a wonderful partnership…and the making of what will surely be one of the most perfectly bizarre movies of all time.”