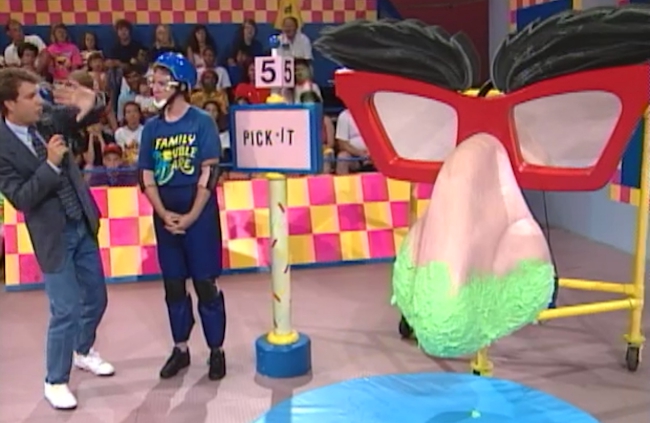 I’d estimate that 17% of the internet is devoted almost exclusively to nostalgia, as it allows people to go back to simpler times before we realized everything we were promised as children was a lie.

Few things define the essence of pop culture in the 90s like Nickelodeon, the network that was home to countless shows that shaped the childhood of millions of people.

I’m still waiting for my parents to get me a subscription to Nickelodeon Magazine.

In hindsight, it’s crazy that some of the shows that ran on a network targeted at children ever managed to air in the first place— like Rocko’s Modern Life, which was filled with tons of questionably adult jokes anyone under the age of 10 was incapable of understanding in the first place.

Of course, one of the main cornerstones of Nickelodeon was the many game shows it aired that gave children around the country hope they could one day take home a piece of the Aggro Crag (or, in the case of other shows, a VHS player and a Chrysler Town and Country).

Unfortunately, anyone who wants to relive the era has mostly had to rely on grainy YouTube clips to get their nostalgia fix— at least until now.

According to Entertainment Weekly, Nickelodeon is finally doing the world a great service by launching a streaming channel featuring basically every single show from its Golden Age.

Dubbed “NickSplat,” the channel will give subscribers access to a treasure trove of shows, including cartoons like Doug and AAHHH REAL MONSTERS!

It will also feature comedic classics like All That! and Kenan and Kel in addition to game shows like Legends of the Hidden Temple and, most notably, the incomparable Double Dare 2000 (which Mark Summers gave us some insight into earlier this year).

You can view the full list of shows here.

The channel, which is part of the VRV streaming platform, will run you $5.99 a month (unless you opt for VRV’s premium package at $9.99) but can you really put a price on reliving childhood memories like these?