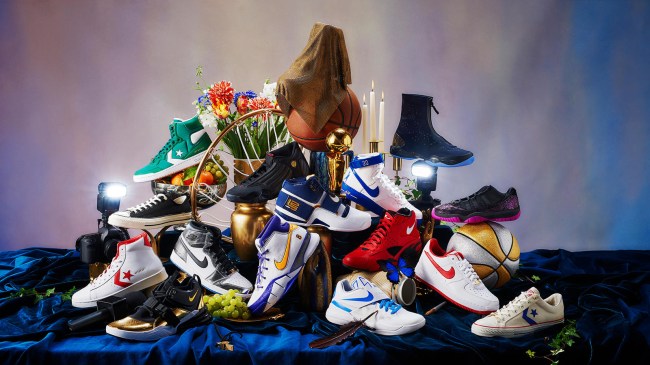 16 wins. That’s how many games you need to win in the postseason to secure an NBA title and guarantee yourself a page in the NBA history book. To commemorate the 16 games a player must win to hoist the Larry O’Brien trophy, Nike is dropping 16 iconic basketball shoes worn by NBA stars in defining moments in each player’s quest for NBA royalty.

Check them out below:

The shoe commemorates Kobe’s game-winning shot in the waning seconds of Game 4 against the Phoenix Suns in the first round of the 2006 Western Conference playoffs. Kobe finished the game with 24 points and 8 assists.

Kevin McHale’s iconic clothesline Lakers bad boy Kurt Rambis on a breakaway dunk attempt is often the clip shown to demonstrate how lit the game was in the 80’s.

Pippen became only the 12th player to record a triple-double in a Finals game: 15-12-12, and becoming the pivotal element in a Bulls three-peat.

After receiving a cheap shot from Lakers forward Slava Medvedenko in the second half of the 2004 Finals, Rasheed took over: scoring 26 points, grabbing 13 rebounds and leading the Pistons to an 88-80 win.

30 points and 40 rebounds in Game 7 of the Finals. Yes, you read that correctly.

In a colorway paying tribute to Maya Moore's swift acendence in the pro ranks, the Jordan XI Low “Rook to Queen” drops on May 24. pic.twitter.com/oy4mScBFo4

The UConn legend led the Minnesota Lynx to its first-ever championship just six months after she was drafted.

Kawhi Leonard dropped 29 points in Game 3 of the 2014 NBA Finals in his junior season as a pro. The Spurs would go on to rout the Heat, 4-1, and Leonard would earn Finals MVP.

Moses Malone's retroactive clarvoyance in '83 was the impetus behind the Nike Air Force 1 Low Retro “Fo’ Fi’ Fo.’” It releases May 19. pic.twitter.com/AaJCNulDn8

In 1983, Moses Malone nearly predicted his Sixers would sweep the Bucks–declaring “Fo,’ fo,’ fo,’” before dropping just one game and amending his declaration to “Fo,’ Fi,’ Fo.’”

In Kevin Durant’s quest transform into the Kevin Durant we know today, he led his Thunder team by the Mavs, Lakers, and Spurs before losing to LeBron and the Heat in the 2012 Finals. Despite losing, KD averaged 30.6 points per game on 54.8-percent shooting.

James' eye-popping performance from the '07 Playoffs is celebrated by the Nike Zoom LeBron Soldier 1 “25 Straight.” The shoe releases May 31. pic.twitter.com/NbxAokCBWj

In Game 5 of the 2007 Eastern Conference Finals against the Pistons, LeBron scored 29 of the Cavs’ final 30 points, including 25 straight and all 18 of their overtime points to catapult him to his first ever Finals appearance.

All I have to do is write ‘Dr. J’s “The Scoop”‘ and the image is already playing in your head.

Did MJ push off Bryon Russell in Game 6 of the 1998 Finals to secure his sixth championship and his sixth Finals MVP? The answer is no. He did not.

If it weren’t for Ray Allen’s game-tying three in Game 6 of the 2013 NBA Finals, LeBron would not have repeated as champion.
[h/t Nike]