Nikki Bella Reacts To John Cena Dating Another Woman: ‘I Didn’t Want To Sh*t My Pants’ 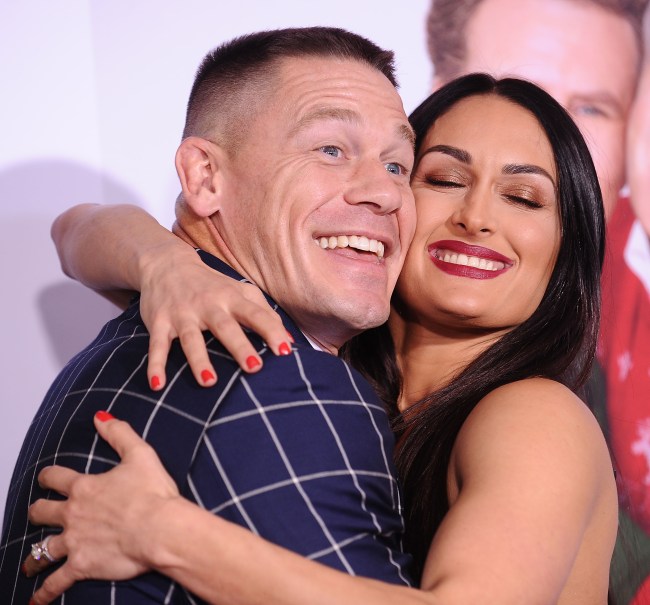 It’s been nearly one year since John Cena nearly broke down in tears on The View about former fiancee Nikki Bella breaking his heart and how he desperately wanted to marry her and have a family. Well, life happens, and even the great John Cena isn’t immune to getting his heart stomped on.

The two have been separated for a year and for the first time last month, Cena was spotted with another woman–Shay Shariatzadeh, a successful engineer who lives in the Vancouver area.

Potential new flame alert! #JohnCena was spotted holding hands with #ShayShariatzadeh in Vancouver, so who is this lovely lady? 💕 Learn all about her at the #linkinbio. (📸: YouTube; Inset: VCG/VCG via Getty Images)

On Wednesday’s episode of The Bellas Podcast, the former WWE star said that her “stomach went into knots” when friends started texting her about this new “mystery woman.”

“I opened it up and when I saw the photo, it was weird,” Bella, 35, said, before sharing that her emotions quickly took a turn. “Sometimes when you get a text, or you see a photo, or you see your significant other flirt with someone, you know how you get those knots in your stomach and it hurts? You either want to poop your pants immediately … or you just have the craziest tummy ache? Neither of that happened to me.”

“When I saw the big smile on his face with the paparazzi photos, I think that’s why I didn’t want to s–t my pants,” she continued. “I felt happy for him. I am very happy for him. As long as John is happy, I’m happy.” [via]

Bella also revealed that she’s still “protective” of Cena and if Shay breaks his heart, she’ll “rack-attack her in a heartbeat.”

The 35-year-old also claimed to have regrets in the one-sided nature of their breakup, as it unfolded on her reality show.

“You saw a very small amount on our reality show about our breakup, and, of course, it was pro-me, because it was coming through my eyes, and I don’t think I ever got to say this publicly, but it made me sad for John,” she said. “John is an amazing man, and you know what? Our timing wasn’t right.”

Who knows how Bella would feel about Cena’s new love interest if she herself wasn’t dating someone. Bella confirmed she is dating her former “Dancing With the Stars” partner Artem Chigvintsev.

Well after that season finale 😳 First thing I’ll be talking about this Wednesday… oh and all those paparazzi photos (thanks for all the great shots 🙄 and smashing my food 🙄 lol) Swipe up in my IG story. #thebellaspodcast #bellaspodcast