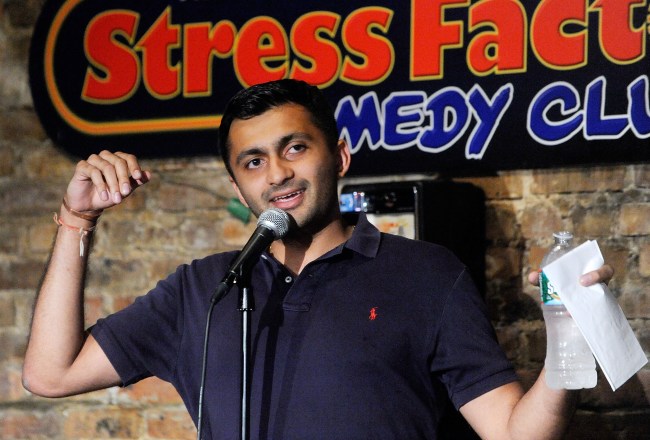 Nimesh posted this a couple weeks ago, but I just saw it today. I’m sorry for blogging it late but it’s just too incredible not to blog.

The backstory for those who don’t know/remember: Nimesh Patel is an Indian-American comedian, and a very good one at that. He wrote for SNL, was “discovered” by Chris Rock, has opened for Chappelle, is a regular at the Comedy Cellar, and is, in my opinion, one of the smartest comedians going today. In 2018, he was booked for a college gig at Columbia. Some time into his set, he made the following joke (in his words, from an article he wrote for the NY Times about the incident):

I open by saying I live in Hell’s Kitchen, a diverse area in New York populated by, among others, gay black men who are not shy about telling me they don’t approve of what I’m wearing. I try to learn things from everyone I encounter, and one day I realize oh, this is how you know being gay can’t be a choice — no one would choose to be gay if they’re already black. No one is doubling down on hardship.Then I say, no black dude wakes up and thinks that being a black man in America is too easy. No black dude says, “I’m going to put on a Madonna halter top and some Jordans and make an Indian dude real uncomfortable.” That’s not a choice.

Here it is in the set:

Nimesh went on Rogan to tell the story. He wrote about in the NY Times. He came on our podcast and talked about it, in one of my favorite episodes we’ve done:

Needless to say, he’s doing just fine. This didn’t “cancel” him so much as it served as a talking point about the outrageous sensitivity of college students today. The vast majority of reasonable people seem to agree that NOTHING Nimesh said was disrespectful, or racist, or bad in any way. If anything, this moment was something of a rallying point for comedians and comedy fans, as we all were able to say that clearly, political correctness had swung too far in the wrong direction.

I had never seen the tape until today. Watching those three students take the stage to boot him off behind some pathetic, fake reasoning made me feel very warm inside—all because Nimesh stood his ground, eloquently defended his jokes, and made them squirm.

“There’s a change of program. We have some triple-A remarks to make.”

“There’s a change of program. The tech has to leave for an event.”

Cowards. Don’t piss on our face and tell us it’s raining. If you want to get him off the stage, tell him why. Instead, he had to drag it out of you.

“Is it because I’m talking about uncomfortable stuff?” he says. And only then do they reveal their real motivation, which is that they felt he was more disrespectful than uncomfortable.

What in tarnation does that mean? Entitled to jokes? Who gets to determine who is entitled to jokes?! I mean, the obvious answer is… the constitution. Everyone in America is entitled to say whatever the hell they want; you just have to know that saying certain things will have consequences. But telling someone they don’t have the RIGHT to say something is about as un-American as it gets.

Nimesh then delivers my favorite line of the whole ordeal:

“You can’t insulate yourself from how the real world is.”

The thing about ultra-sensitive people is that they expect you to bend to their will. They think that by calling you a racist or a sexist, you’ll be so afraid that you’ll back down and stay quiet for a while. They’ve weaponized these words and are misapplying them to the thinnest of offenses, and because those words are so powerful, it’s scarier to stand up for oneself than to simply walk away. But Nimesh wasn’t having that for a second. Guy was a brick wall, firm in his convictions, and he delivered some incredibly poignant messaging before they cut off his microphone.

It sure felt inspiring to me. Watching him stand up for what he believed in, on a hostile stage, with the event organizers staring him down and a crowd kindaaa booing him (with a few supporters), had me ready to run through a wall.

Be like Nimesh. Or, at the very least, if you’re not comfortable talking about the uncomfortable stuff, be willing to listen.