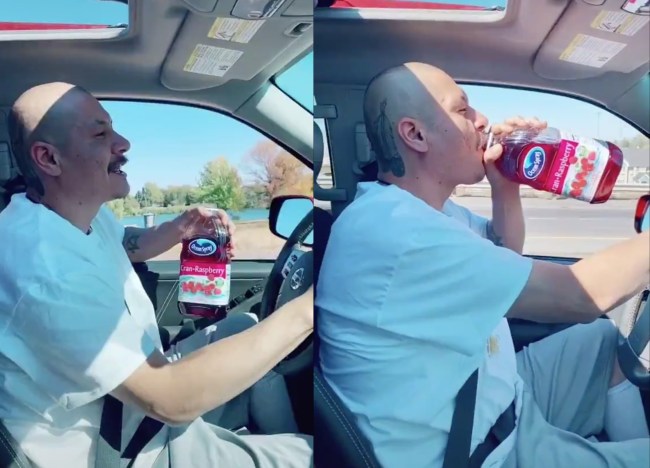 Not gonna lie, it’s been a while since I’ve enjoyed someone going viral as much as TikTok star Nathan Apodaca aka 420doggface208. It’s so pure and so fun; I’m so used to people going viral and instantly cringing when they inevitably on Ellen or watching it go sideways when someone digs up something they posted on Reddit. Knock on wood, 420doggface208 is doing viral fame right.

Because social media stardom and relevance is the ultimate dopamine hit, most people who go viral try too hard to parlay their 15 minutes into a career that’s not going to work out or an exhausting pursuit to stay relevant.

But 420doggface208’s viral comeuppance is so simple that it’s refreshing in unusually chaotic times. He caused Fleetwood Mac’s 1977 classic, Dreams, to chart again, prompting the perfect TikTok response from Mick Fleetwood himself.

And his backstory is completely humbling, as my colleague Connor put it so perfectly earlier:

All signs point to him being an incredibly down-to-earth, wholesome, and hard-working dude. The video in question was actually the result of his truck (which has over 300,000 miles on it) breaking down while he was on his way to the potato factory he works at, which resulted in him grabbing his skateboard to finish the last mile of his commute and deciding to film the clip en route.

He almost didn’t upload it, as he was putting the finishing touches on things while waiting to clock in but it’s safe to say he’s glad he did, as he didn’t only receive millions of views but over $20,000 in donations, $5,000 of which he gave to his mom and dad, who he described as Fleetwood Mac “fanatics” who turned him onto the band in the first place.

Apodaca is still living in a trailer in his brother’s front yard (he has to use his sibling’s house whenever he needs running water) but says a real estate agent has reached out to offer to help him put a down payment on a house for him and his family. He’s hinted Ocean Spray has reached out to him about a potential collaboration, and while he’s taken some time off from his primary job, he says he plans to return to the processing plant when his life eventually gets backs to normal.

Now we’ve reached the next chapter of the 420doggface208 story: The cash-in.

On Tuesday afternoon, Ocean Spray hooked Apodaca up with a brand new truck. He no longer has to long-board to work because his car battery died.

Ocean Spray reps swung by Apodaca’s trailer home to hand over the keys to a 2020 Nissan Frontier PRO-4X 4WD Crew Cab, valued at $37,774. It was bought at a local dealership and loaded up with Ocean Spray cranberry juice.

The fresh Sector 9 cruiser is a rad touch.

This resulted in the perfect follow-up video, as posted on his TikTok.

It’s perfectly captioned, too: “Thanks for the wheels, Ocean Spray.”

In a statement, Ocean Spray’s CEO, Tom Heyes, thanked him for the positivity:

“He has brought such positivity to such uncertain times… When I first saw Nathan’s video, I knew Ocean Spray wanted to help…we’re so glad we could gift Nathan a cranberry-red truck, and be a part of movement that is bringing such positivity worldwide.”

For the weirdos out there saying stuff like they're probably going to stick him with the Tax bill. Even if they did it only about $2,700. If you're telling me you wouldn't pay that for a $40,000 truck then just delete your life. pic.twitter.com/uq9QTdwByD

Absolutely awesome. Congrats to 420doggface208 on livin’ the dream.

Nice to finally see the common man win one.

So many parties have benefitted. pic.twitter.com/jgruxuN2Aa