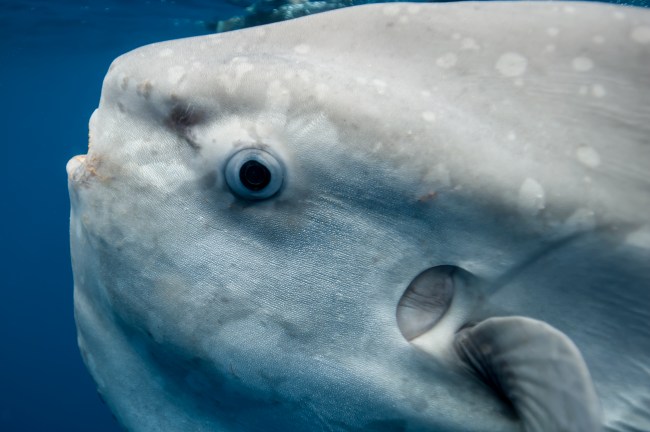 Cape Cod police in Wareham, Massachusetts have been getting A LOT of calls lately about a mysterious species in the ocean that’s been getting stuck in shallow water. A lot of residents mistake it for a Great White Shark or sea monster and call the police to alert them of a possible man-eater in the area that is trapped and needs rescuing. Great Whites are common to the area throughout the Summer but they’ve already begun to migrate south ahead of the Winter.

The Wareham Police Department wants everyone to stop calling. It’s not a shark. It’s not a threat whatsoever. The tide will come back and the fish will be fine. And the Wareham Dept. of Natural Resources was hauled out to Broad Cove to investigate only to find a fish which they already know inhabits that area this time of year.

The creature causing this kerfuffle is a peculiar one, it’s the Ocean Sunfish and it is easy to see how someone might mistake one of these fish for a shark because their fins can protrude out of the water like a shark’s dorsal fin.

If the name ‘Ocean Sunfish‘ rings a bell it might be because of this video that went viral a few years ago where a guy from Boston freaked out over this majestic creature. Let’s check that out one more time, shall we?

According to the Cape Cod Times, the calls started rolling in on Monday:

“We are aware of a sunfish in Broad Cove. We have checked on it, and it is doing normal sunfish activities. It’s swimming. It is not stranded or suffering. The sunfish is FINE.
Dont be jealous just because it’s not swimming weather anymore!
PLEASE STOP CALLING THE POLICE DEPARTMENT ABOUT THIS SUNFISH!!”
Wareham Dept. of Natural Resources Director and Harbormaster Garry Buckminster said he heard some of the calls to police were via 911.
His office started getting calls Monday at 6:30 a.m. – it’s a seal, it’s a shark. Many even got it right, it’s a sunfish.
He said the concerned calls are appreciated but not to police who have more pressing matters.

If we’re being honest here I really just wanted to write this article so I could watch that viral video of the Boston accent guy losing his mind over the Ocean Sunfish. If you skipped that clip above you should 100% watch it, it’s great, as long as you’re not offended by language. Here it is again:

According to the Cape Cod Times, these massive open ocean fish are so big that they sometimes wander into shallow areas and can get stuck when the tides go out and what people often see when they’re close to the shore like that is a fish who is trapped until the tide comes back in and they can swim freely again.

These fish also ‘fatten up’ in Cape Cod Bay throughout the Summer alongside the Great Whites who are there to feast on seals. Juvenile Ocean Sunfish are common to the area which makes it a bit more perplexing why the locals wouldn’t be able to identify the species. Regardless, you don’t call 911 because you see a stranded fish.

The Cape Cod Times has some interesting information on a sighting program that’s already spotted 20 of these fish this year as well as a local biologist discussing show she’s had tt handle 1,000+ pound carcasses of these fish. You can click here to read that article in full.