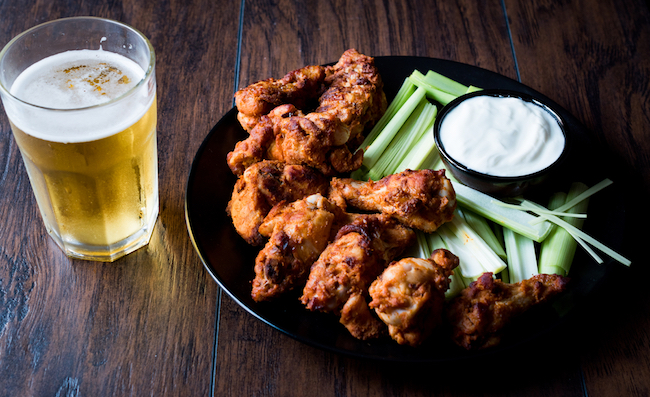 The airplane, the automobile, the light bulb, the microwave oven, the personal computer, and buffalo wings are some of the many American inventions that have enhanced society. Now you can trace back the history of the infamous drunk cuisine and go on a buffalo wing trail in the city where it started it all — Buffalo, New York.

The tourism department for the Buffalo, N.Y., the birthplace of the buffalo wing, is now offering a tour of some of the greatest buffalo wing joints in the world. The Buffalo Wing Trail will give you the chance to visit 12 restaurants and devour this delectable pub grub classic. The restaurants were selected from imput from locals and social media as to which are the greatest buffalo wing spots in the city. Then the tourism board gathered an esteemed panel of buffalo wing connoisseurs to whittle the top places down to just 12 with a series of tastings. Why was I not called?

Of course one of the stops on the food tour will be the Anchor Bar, which is credited for inventing buffalo wings in 1964. The spicy poultry delicacy was allegedly invented when Teressa Bellissimo took the chicken wings originally intended for a soup she was making, but then fried them, and tossed them in cayenne hot sauce. There are rumors that she made them for her son Dominic and several of his friends from college as a quick, easy, cheap snack for them. Other origin stories include that it was a Friday night at the bar and it was busy so they wanted to do something nice for them so they whipped up the wings because they it was after midnight and they were able to eat meat again. Another rumor is that the bar received an errant delivery of wings, so they had to find a way to use them at the bar.

“We’re very fortunate to have a very iconic item that’s on so many restaurant menus,” said Patrick Kaler, president and CEO of Visit Buffalo Niagara. “We were looking for places that have interesting stories to go along with their great wings,” said Kaler. You can check out the Visit Buffalo Niagara website or their Instagram for more information.