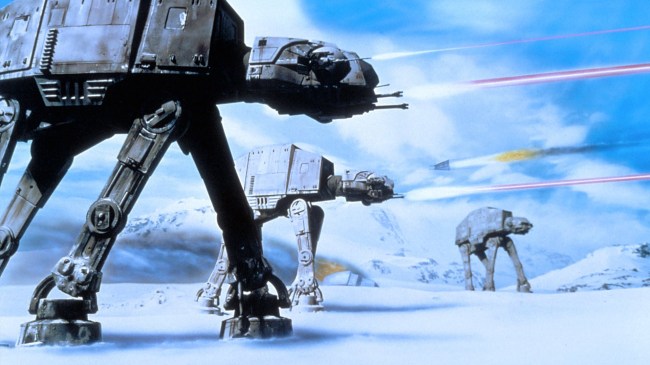 A guy in my city built a giant AT-AT! #StarWars pic.twitter.com/ANXtY1gXr8

Nick Meyer constructed this huge AT-AT replica and set it on the front yard of his house in Parma, Ohio. “I just thought it would be neat to build a walker,” Meyer told Cleveland.com. Remember when you created something that was 2-stories-tall because you thought it would be “neat.”

Meyer started building the AT-AT replica way back in April and finally finished last week. He created the AT-AT out of wood, hard foam, and plastic barrels. The Empire’s coffers must be pretty low these days after battling the Rebels and pouring all of their money in a couple of Death Stars if they can’t afford metal for their Imperial walkers. He’s just missing some snow to instantly transport us to Hoth.

So this guy must be an obsessive Star Wars fan right? Meyer says he enjoys the Star Wars movies but isn’t a fanatic and created the All Terrain Armored Transport because he thought it would be unique. “It was a weekend project,” said Meyer. “We would tinker with it on the weekends.” Beats the hell out of your stupid scarecrow Halloween decoration you made with old plaid shirts and pillows. What does one do with a 2-story-tall AT-AT after Halloween is over? It would be a shame to tear it apart. Maybe put in the backyard, add a ramp, and make it the greatest shed in the galaxy?