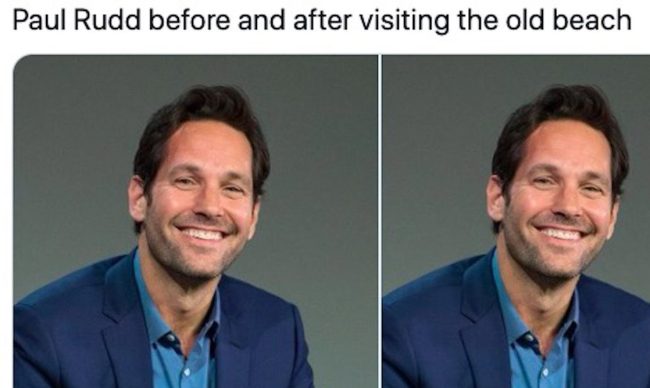 Slight entertainment writer flex here — if such a thing possibly exists — but I was absolutely crushed with screeners last week, particularly for The Suicide Squad, Stillwater, Jungle Cruise, and M. Night Shyamalan’s Old. Of those four, Old was the only one I didn’t make it to, and now I wish I had. Nothing against Old or M. Night, really, it’s just the other films held priority: I was interviewing Matt Damon for Stillwater (second flex of the paragraph, no big deal), The Suicide Squad is a film the DCEU *needs* to be good, and Jungle Cruise features two of Hollywood’s best movie stars. Plus, the timing just didn’t work. All that said, given the uproarious reaction to the movie so far, I wish I’d made the time because while it’s not something I’m willing to pay for, it’s definitely something I want to see.

In case you haven’t already heard, the plot of Old is that a family finds themselves on a beach that makes them… you guessed it, old! Old very quickly. Lifetime in a day type stuff. Like most of M. Night’s films, it’s a wicked premise. And, similarly, like most of M. Night’s films, it apparently doesn’t quite come together in the end, as the film currently boasts a 50% critics score and 51% audience score on Rotten Tomatoes.

If nothing else, though, Old — once again, like most of M. Night’s films, nothing a pattern here? — is driving conversation amongst movie fans, this time in the form of hilarious and intentionally simplistic memes about “the beach that makes you old.”

The opening scene of Saving Private Ryan on D-Day, but instead they stormed the Old Beach pic.twitter.com/k1Xozrhbgw

“so there’s a beach that makes you old?” pic.twitter.com/UigZzvS2VR

BREAKING: Jason Derulo has fallen down the stairs at the beach that makes you old pic.twitter.com/EFtuzUOiTl

please captain america, you need to get off the beach that makes you old pic.twitter.com/Xa8vPVIDRF

ok everyone stop posting about that beach, it got old fast

If you brought Benjamin Button to the OLD beach would he get younger or older pic.twitter.com/dc0ai6DkMB

a beach that makes you old? in this economy?

me taking my husbands to the beach that makes you old pic.twitter.com/dX7h9Pth7k

Paul Rudd when he gets to the beach in Old vs when Paul Rudd leaves the beach a few days later pic.twitter.com/kDn16pQSJH